skip to Main Content
(612) 929-2277 info@preferredspeakers.com
TwitterFacebookLinkedIn
In case you missed it, Jay Coughlan's new book, Five Bold Choices: Rise Above Your Circumstances and Redefine Your Life was released in January, 2017. Here's what Jerry Colangelo, Chairman, U.S. Men's Basketball , Former Owner, Phoenix Suns and Arizona Diamondbacks, has to say about the book: "Adversity brings opportunity, and how we deal with it determines whether we enjoy the journey. Five Bold Choices is a great guidebook for anyone who feels stuck and wants to get back on the path they were destined to live." 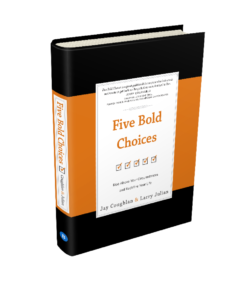 Co-author Jay Coughlan was confronted with a personal hell that started with making a terrible choice to drive home after drinking with his dad. This decision resulted in a horrific car crash that killed his father, leaving Jay injured and devastated. In his darkest hour, he found forgiveness and discovered the strength to go forward. Though the road ahead was no picnic, it would eventually lead him from convicted felon to successful CEO. In his book, Five Bold Choices, Rise Above Your Circumstances and Redefine Your Life, Bold Choice #1 is: CLARITY: Keeping the important things important Authors Larry Julian and Jay Coughlan share their definition of Clarity
jay coughlanlife changemotivationrise above
Share This
Related Posts

Jay helps audiences understand we have CHOICES. There are times in our life where we…

In case you missed it, Jay Coughlan was on the FBN Mornings with Mario Bartiromo…

Adopting an Attitude of Gratitude

The month of November signals the whirlwind holiday season is just around the corner, and…