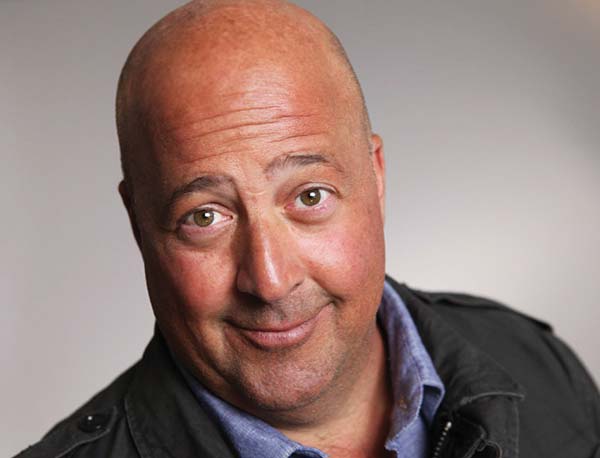 Host, Bizarre Foods With Andrew Zimmern
From navigating the kitchens of acclaimed three Michelin star restaurants to negotiating dinner in one of Southeast Asia's hidden jungle markets, it all comes easily to Andrew Zimmern. He is the co-creator, host and contributing producer of "Bizarre Foods with Andrew Zimmern" on the Travel Channel. He travels the world, decoding cultures and countries one meal at a time.

Zimmern knows that one man's weird is another man's wonderful, and isn't afraid to poke a little fun at the local fare or himself. This energetic chef, culinary anthropologist and unapologetic food lover takes viewers deep into the heart of a people to savor the local cuisine -- even if it means chewing on eggs with legs, gulping down a frog's still-beating heart or learning kitchen techniques from the tribeswomen of the Kalahari. It's all about sharing food and culture.

A New York City native, Zimmern began his formal culinary training at the age of 14, apprenticing with some of the greatest chefs in the world. As a journalist, Zimmern is one of the world's leading experts on what to eat and where to eat it, and his byline appears monthly in Delta's SKY magazine. In May 2010, Zimmern won the James Beard Award for Outstanding TV Food Personality, the nation's most prestigious recognition for food and beverage industry professionals. His book, The Bizarre Truth, chronicles his life on the road, and the food, people and adventures that make traveling such a life changing experience.

He's been a guest chef at national charity events, food festivals, and galas, including the New York City Wine and Food Festival and the James Beard House in New York City, and has been a guest on numerous shows including Top Chef Masters, Iron Chef, the Today Show and the Tonight Show with Jay Leno.

Zimmern is in demand as a speaker on a variety of topics, not only related to bizarre foods and, but to his amazing personal journey from homeless drug addict and alcoholic to his recovery and current success. Andrew says, "Any decision that I make, anything that I do, every single consideration of my day goes through the prism of what my former experience has been. And I have a life based on completely different principles now and I try to stick with those. I think it has been the secret to my success."

No matter where he appears, he's game for anything and knows the most interesting food is found closest to the source. So whether he's chasing down giant aquatic rodents in the Louisiana bayou or plating sea urchin roe with Nobu Matsuhisa, you can be sure the guy with the iron stomach will always dish up the unimaginable.

Food: A Global Perspective on the State of our Food Life
Andrew Zimmern takes you with him for a whirlwind tour of his world travels, informing and entertaining as he connects the audience to both his "boots on the ground" experience and his philosophies of both food and life. His amazing stories cover everything from the great global food scene to how you really can change the planet one meal at a time, as he's experienced firsthand breaking bread (or other things!) with people from Syria and China to Cuba and the Kalahari desert.

Inspiring, enlightening and always entertaining, Zimmern shows that the world is truly getting smaller, and that the best place to learn about it and other cultures, is at the dinner table, not in a museum.

The Adventure of Recovery
Stay far away from what William James called the evil of "contempt prior to investigation." Andrew Zimmern has used this motto as a bedrock of both his personal and professional life.

While most people know him as the host of his own wildly popular TV show, they might not know that he is also a survivor of drug addiction, alcoholism and homelessness. Now in his 20th year of sobriety, his inspiring and funny story is a prescription for hope that can be applied to anyone regardless of their life situation.

Zimmern grew up on the upper east side of NYC, was a daily drug user from the age of 15 and lay dying in a hospital bed at age 21 of acute alcohol poisoning. He continued to abuse drugs and booze for another 10 years before going homeless and off the grid in 1990. Drinking himself to death in a flop house hotel in January of 1992 he had a life-changing experience that saw him check into rehab, sober up and stay clean. Devoting himself to helping others, his life changed, his show "Bizarre Foods" is a direct result of his channeling that life choice, telling his stories through food and travel adventures.

Zimmern combines his personal and professional stories in an audio and video presentation detailing his fall and rise, his experiences in recovery and how those lessons have informed his life as a husband, adoptive father and activist for the social issues he holds dearest.

Zimmern believes that the best way to change the world is to share a meal with a stranger and his family, telling stories from the fringe as you seek to learn about the world and yourself in the global classroom of the traveler's universe.

His funny and inspiring message spans both the personal and the professional, and he gladly exemplifies the necessity for a public face to be put on the private hell of addiction.

Speech Topics: Celebrity   Celebrity Chef   Inspiration   Recovery
Our goal is to provide speakers that encourage, entertain, and educate, YOUR audience! Work with Preferred Speakers to book the perfect speakers and entertainers for YOUR event!
Get In Touch
© Copyright - Preferred Speakers - 2022
Back To Top