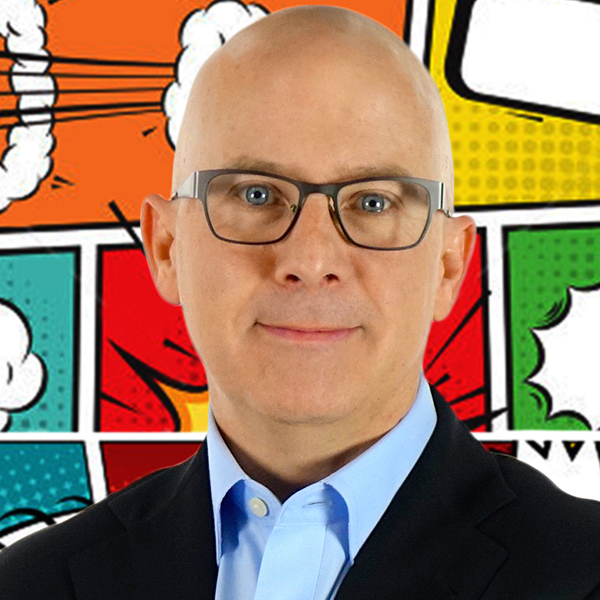 Brad has transformed audiences in all 50 states and on four continents. His clients include Microsoft, Verizon, the FBI (yes, that FBI) the CIA (yes, that CIA) and the IRS (where he withheld 30% of his best strategies.)

Brad specializes in using humor, interactivity, sound, music and visuals to ignite audiences so that they can use happiness as a tool to improve their lives and their jobs.

Audiences and meeting planners describe Brad as authentic. He's a real guy on stage and off. Thinking of a canned &; over-polished motivational speaker? Brad is the polar opposite.

Other speakers TALK about happiness. But Brad SHOWS them how to harness the power of happiness in hands-on experiences that they'll remember and implement. It's the difference between a speech and an event.

Brad graduated from Brown University, and has earned his Certified Speaking Professional designation, which is the highest earned award from the National Speakers Association (Fewer than 7% of speakers worldwide have earned the CSP.)

Brad was inducted into the CPAE Speakers Hall of Fame, which is a big deal. Like an Oscar, but without the movie stars. The National Speakers Association picks the best keynote speakers for their Hall Of Fame.

Brad lives in Centennial, Colorado with his wife and three kids. Although he is proud of his many awards and national credits, he's convinced that his best feats so far are his kids.

Happiness Pays: The How’s and Wise of Happiness at Work
This keynote covers much of the very exciting – and fairly recent – science, behind happiness and how you can use that science to excel. Happy people and happy organizations outperform their less happy counterparts big time. Happiness is a skill that can be broken down into skills. Happiness can be taught. And happiness can be learned. Your audience will leave this keynote energized, excited, and ready to implement happiness strategies that will increase their happiness starting now. Need real content from an inspirational business speaker? This topic is for you.

Laugh-O-Nomics 101 — Connecting Happiness At Work to Business Success
What is it? According to Webster’s Dictionary “Laugh-O-Nomics” means …… Ok, you got us— it’s not in the Dictionary. Yet. Learn the hows and whys of happiness as it relates to your life and your job. You’ll learn some of the science behind happiness; but even better, you’ll learn some surprisingly simple techniques to incorporate immediately at work and at home that will make you — and your organization — happier. Whether you’re a front-line employee or a supervisor or a C-Suite leader, you’ll be more effective and productive using happiness as a tool. You’ll leave with specific action steps that you can incorporate into your work style — and your organization — tomorrow. Funny. Totally Engaging. Motivation They’ll Remember.

Motivation: Embrace Your Awesomeness
In this uplifting, inspirational and very funny keynote Brad reminds us that each one of us is important and have the ability to make a tremendous difference. Were are more influential than we think. We have purpose. We are important. We are awesome. We tend to underestimate our influence, our ability to make change, and our ability to do amazing things. Brad reminds us to stand up, take charge, and embrace our awesomeness. Do your people need to be reminded of their sense of purpose? Do your clients need a message of appreciation? Do you need to empower your people to reach their very best and to inspire the best out of those people around them? Then this motivational keynote speech is for you. For clients looking for an inspirational speaker — who is both engaging and business-oriented.

Leadership: It Takes the Right attitude To be A leader.
Often your leaders, managers, supervisors are excellent at their job but they are not very good at inspiring their teams. They have forgotten the importance of attitude and leadership. Positive, upbeat, and can-do attitudes start at the top and trickle down. Excellent leaders know how to create buy-in and loyalty by demonstrating it themselves. They help create a positive culture by leading with their own attitudes. In this hands-on, very funny, and inspiring keynote your leaders will leave ready to make a difference with their teams. If you’re looking for Management 101, or 12 steps to Leading An Organization, this is NOT the keynote for you. But if you’re looking for a way to energize, inspire, and empower your leaders to both have ridiculously positive attitudes and be ready to share that positivity, then you this program is for you.

Change Management — Brad Style
“I’m Fine With Change — As Long As I Can Keep Doing It The Same Way As Last Year.” If your people and your organization are suffering from an overdose of change then you need a dose of Brad Montgomery. In this very funny keynote Brad brings an outside perspective to change. He helps your people to understand that not only is change inevitable and unavoidable, but it is both a secret and necessary ingredient to growth and personal happiness. In this keynote he connects happiness (both generally and at work) to not only accepting change, but thriving because of it. Both people and organizations suffer with stagnation. And yup, change is hard. Really hard. Brad helps ignite an attitude in which your people will celebrate the positivity of change. They will be engaged. They will laugh. But most importantly they will leave with a new perspective that helps them deal with the genuine stresses of change. For organizations needing an inspirational speaker who can help with Change Management.

Speech Topics: Change   Empowerment   Humor   Inspiration   Leadership   Masters of Ceremonies, Emcees and Moderators   Motivation and Inspiration
Our goal is to provide speakers that encourage, entertain, and educate, YOUR audience! Work with Preferred Speakers to book the perfect speakers and entertainers for YOUR event!
Get In Touch
© Copyright - Preferred Speakers - 2022
Back To Top