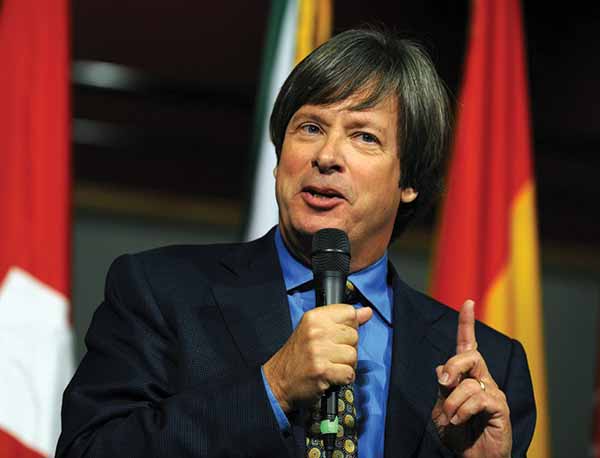 Dave Barry is a humor columnist. For 25 years he was a syndicated columnist whose work appeared in more than 500 newspapers in the United States and abroad. In 1988, he won the Pulitzer Prize for Commentary. Many people are still trying to figure out how this happened.

Barry has also written a total of 30 books, although virtually none of them contain useful information. Two of his books were used as the basis for the CBS TV sitcom Dave's World, in which Harry Anderson played a much taller version of Dave.

Barry plays lead guitar in a literary rock band called the Rock Bottom Remainders, whose other members include Stephen King, Amy Tan, Ridley Pearson and Mitch Albom. They are not musically skilled, but they are extremely loud. Barry has also made many TV appearances, including one on The David Letterman Show where he proved that it is possible to set fire to a pair of men's underpants with a Barbie doll.

In his spare time, Barry is a candidate for president of the United States. If elected, his highest priority will be to seek the death penalty for whoever is responsible for making Americans install low-flow toilets.

Barry lives in Miami, Florida, with his wife, Michelle, a sportswriter. He has a son, Rob, and a daughter, Sophie, neither of whom thinks he's funny.

Speech Topics: Celebrity   Comedy and Entertainment   Humor
Our goal is to provide speakers that encourage, entertain, and educate, YOUR audience! Work with Preferred Speakers to book the perfect speakers and entertainers for YOUR event!
Get In Touch
© Copyright - Preferred Speakers - 2022
Back To Top