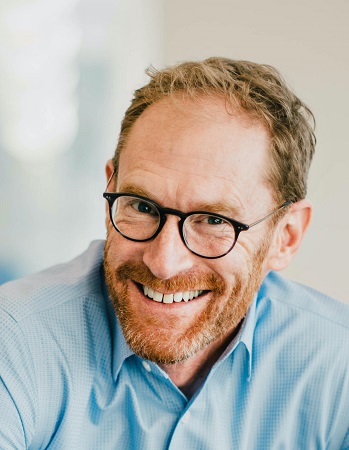 For the past 25 years, David Mann has been a professional performance and storytelling specialist. He has combined his decades of experience as an actor, director, and playwright with the needs of professional leaders, sales teams, and lawyers. The result is a fresh, practical approach for using the power of the narrative to grow business, gain project approval, or win favorable verdicts.

David has presented and facilitated learning seminars at Fortune 500 companies, national trial advocacy programs, and major nonprofit organizations nationwide. He has a specialized focus on persuasive presentation for lawyers, and he is on the faculty of Loyola School of Law and the National Institute for Trial Advocacy. As a speaker, trainer, and performer, David has been featured in The New Yorker, Village Voice, The Business Journal, and Minnesota Business.

A professional theater artist for over two decades, David has performed or directed for the Guthrie Theater, The Children's Theatre Company, Great River Shakespeare Festival, and many other theaters. He has written and performed several critically acclaimed one-man shows and plays, and he is a recipient of a Bush Artist Fellowship for Storytelling. As a commercial actor, David was the spokesman for Midwest Wireless phones for six years, and has appeared in television and radio commercials locally and nationally. David is a graduate of Northwestern University, and the London Academy of Music and Dramatic Art.

Winning With Words: Building your story with persuasive power
In this keynote/workshop we will:

•Explore how to embed your value proposition in your story so clients, boards, and peers will see your ideas as a solution to their problem
•Learn how to build your story so it has impact every single time you tell it
•Transform the way you talk about your business, project, or initiative – either in live presentations or social media videos
•Develop skills of physical and vocal presence to engage audiences, clients, and peers

The Power of Positive Influence: A creative approach to developing team strength
In this keynote/workshop we will:

Embracing Change: How high-performing achievers adapt
In this keynote/workshop we will:

•Learn how to stay flexible when challenges arise
•Develop innate powers of adaptation, imagination, and communications as techniques for dealing with change
•Explore ways to minimize resistance when communicating change to the group
•Examine techniques for seeing limitations as possibilities

Speech Topics: Change   Communications   Creativity   Humor   Innovation and Creativity   Leadership   Motivation and Inspiration   Virtual Presenter
Our goal is to provide speakers that encourage, entertain, and educate, YOUR audience! Work with Preferred Speakers to book the perfect speakers and entertainers for YOUR event!
Get In Touch
© Copyright - Preferred Speakers - 2021
Back To Top