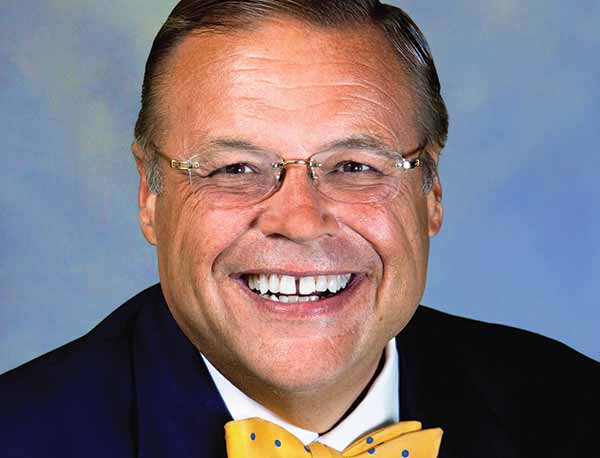 Don Reynolds believes in the greatness of America. As the Paranoid Optimist, he vigilantly monitors the global economy and financial markets. His predictions are based on studious research and analysis, coupled with his expertise in understanding the future of economic powerhouses and emerging markets across the globe.

Don is a past Chairman of $120 billion in Pension and Trust Funds, a graduate of the Securities Institute of the Wharton School of Business, and the recipient of an Honorary Degree from the University of Moscow.

Don Reynolds provides a “Global Big Picture.” He believes most people are generally optimistic, but are nervous about the future. He speaks about what people want to hear—and what they need to hear. Don Reynolds has spoken to more than 1,000 audiences in 19 countries, including the Saudi Arabian Monetary Authority, European Institutional Investor Summit, Russian Academy of Sciences and Harvard Medical School.

Don has given over 1000 speeches, won numerous speaking awards, and been described as “Passionate, Motivational, Charismatic and Mesmerizing.” Heis not just a great economist, he is a gifted story teller capable of explaining real world trends and how they impact corporations, individuals and associations. No one is trusted to manage billions of dollars without developing a track record of success. Over half of the presentations he made last year were for clients who had invited him back for updates on specific economic and industry trends. Clients and media have described him as “near clairvoyant, uncannily precise and brilliant.”

U.S. Economy
The economy’s biggest headwind is uncertainty. Poisonous political partisanship in Washington keeps any true economic recovery from being a reality.

Global Economy
In the last 20 years, the global economy has produced three billion new capitalists with a voracious appetite for consumer products. Asia one of the strongest engines for global economic growth. Europe struggles to define itself. Latin America witnesses the birth of a middle class, and agriculturally rich Canada is perfectly positioned.

Future Trends
The velocity of change is accelerating due to globalization, demographics and technology. When these forces interact, massive changes or tectonic shifts occur that create a visceral new reality. We will confront new ethical dilemmas, new technology inventions that should be commercialized, and unprecedented bio research that will most assuredly alter our lives.

What’s Really Going On
From Time Magazine: “The U.S. economy remains almost comatose. The slump already ranks as the longest period of sustained weakness since the Depression. The economy is staggering under many “structural” burdens; they represent once-in-a-lifetime dislocations that will take years to work out. These include the jobs drought, the debt hangover, the banking collapse, the real estate depression, the health care cost explosion and the runaway federal deficit.”

Speech Topics: Economics   Economy & Finance   Future Trends   Global   Globalization   Trends
Our goal is to provide speakers that encourage, entertain, and educate, YOUR audience! Work with Preferred Speakers to book the perfect speakers and entertainers for YOUR event!
Get In Touch
© Copyright - Preferred Speakers - 2022
Back To Top