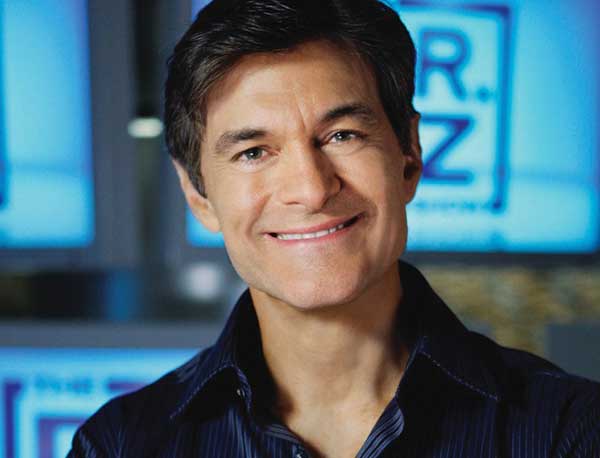 Cardiothoracic Surgeon, Professor at Columbia University, Author and Television Personality
Dr. Oz has won six-time Daytime Emmy Awards for The Dr. Oz Show and is Professor of Surgery at Columbia University. His research interests include heart replacement surgery, minimally invasive surgery, alternative medicine and health care policy. He has authored over 400 original publications, book chapters, and medical books, has received numerous patents, and participates in 50 heart surgeries per year. He also hosts the internationally syndicated Daily Dose in 134 radio markets, a newspaper column in 175 markets internationally, and has a magazine The Good Life, which was voted the hottest new publication in 2014.

Dr. Oz was born in Cleveland, Ohio, raised in Delaware and received his undergraduate degree from Harvard University (1982) and obtained a joint MD and MBA (1986) from the University of Pennsylvania School of Medicine and Wharton Business School. He was awarded the Captain's Athletic Award for leadership in college and elected Class President twice followed by President of the Student Body during medical school. He lives in Northern New Jersey with his wife Lisa of 29 years and their four children, Daphne, Arabella, Zoe and Oliver.

Previously, Dr. Oz was a featured health expert on The Oprah Winfrey Show for six seasons, spanning over 60 episodes. He also served as chief medical consultant to Discovery Communications, where his Transplant! series won both a Freddie and a Silver Telly award. He has appeared on all the network morning and evening news broadcasts and guest hosted numerous shows. He also served as medical director of Denzel Washington's John Q and performed in the hip-hop video œEverybody as part of the Let's Move Caign.

Dr. Oz authored seven New York Times bestsellers, including You: The Owner's Manual, You: The Smart Patient, YOU: On a Diet, YOU: Staying Young, YOU: Being Beautiful, YOU: Having a Baby, YOU: The Owner's Manual for Teens, as well as the award-winning He has a regular column in Oprah Magazine and TIME, and his article Retool, Reboot, and Rebuild for Esquire magazine was awarded the 2009 National Magazine Award for Personal Service. He co-founded Sharecare.com which won œBest Medical App award for AskMD in 2014.

In addition to belonging to every major professional society for heart surgeons, Dr. Oz has been named TIME magazine's œ100 Most Influential People, Forbes' œmost influential celebrity, Esquire magazine's œ75 Most Influential People of the 21st Century, œa Global Leader of Tomorrow by the World Economic Forum, Harvard's 100 Most Influential Alumni, as well as receiving the Ellis Island Medal of Honor and AARP 50 Influential people over 50. He won the prestigious Gross Surgical Research Scholarship, and he has received an honorary doctorate from Istanbul University. He was voted œThe Best and Brightest by Esquire magazine, a œDoctor of the Year by Hippocrates magazine and œHealer of the Millennium by Healthy Living magazine. Dr. Oz is annually elected as a highest quality physician by the Castle Connolly Guide as well as other major ranking groups. He is also an honorary police surgeon for New York City.

How We Can Achieve the Good Life
Dr. Oz started as a heart surgeon and learned that people change more based on how they feel than what they know. He will use exles in exercise and obesity to review what holds us back from changing and how we can alter that destiny. There are 5 big adjustments that control 70% of how we age and he will tackle these using clips from the show and fundamental medical insights so the audience can take home actionable tips for their friends, family, and potentially clients. He will share some communication insights learned working with Oprah and on his own show over the past 15 years. New mobile approaches can help demonstrate how he sees the health field rapidly becoming dominated by digital influences, analogous changes are spreading to financial services and leisure options. Nevertheless, the best way to live longer is to give your heart a reason to keep beating.

You on A Diet: Is Alternative Medicine Ready for Prime Time?

High to Low Tech Medicine: Finding the Edge of Innovation

Speech Topics: Celebrity   Health and Wellness   Healthcare   Innovation   Motivation and Inspiration
Our goal is to provide speakers that encourage, entertain, and educate, YOUR audience! Work with Preferred Speakers to book the perfect speakers and entertainers for YOUR event!
Get In Touch
© Copyright - Preferred Speakers - 2022
Back To Top