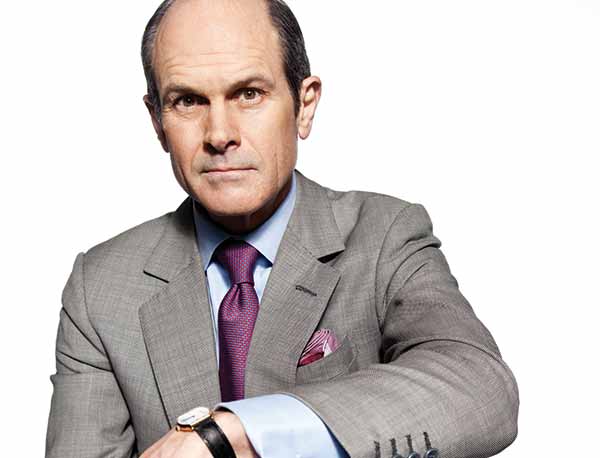 Senior Editor-at-Large, FORTUNE Magazine, Best Selling Author/Commentator on Business & Economic Issues
Geoff Colvin is an award-winning thinker, author, broadcaster, and speaker on the most significant trends and issues impacting business and the economy. As Fortune magazines senior editor-at-large, Geoff has an insiders perspective fueled by long-standing relationships with the worlds top leaders in business and government. (Read more)

Now in his fourth decade at Fortune, Geoff Colvin’s breadth of experience is impressive. He is one of business journalism’s sharpest and most respected commentators on leadership, management, globalization, regulation, corporate governance, competition, the economy, the InfoTech revolution, human performance and related issues. Geoff’s regular column and frequent cover stories in Fortune have earned him millions of loyal readers. His weekday Power Sheet newsletter, free through Fortune.com – provides a detailed look at how individual leaders are shaping today’s tumultuous world.

Geoff is also one of America’s preeminent business broadcasters. He is heard every day on the CBS Radio Network, where he has made over 10,000 broadcasts and reaches seven million listeners each week. He has appeared on Today, The O’Reilly Factor, Good Morning America, Squawk Box, CBS This Morning, ABC’s World News Tonight, CNN, PBS’s Nightly Business Report, and dozens of other programs. He served as anchor of Wall $treet Week with Fortune on PBS, and spoke each week to the largest audience reached by any business television program in America.

As a keynote speaker, Geoff has a knack for bringing clarity to the most important and complex issues impacting business and the economy. He has spoken for scores of corporate and association conferences on six continents including dozens of high level Fortune conferences. His speeches pull together timely insights and strategies and are tailored to deliver relevant insights that help leaders understand what the future holds.

Geoff is a respected author whose groundbreaking international bestseller, Talent Is Overrated: What Really Separates World-Class Performers from Everybody Else, has been published in a dozen languages. The Upside of the Downturn: Management Strategies for Difficult Times was named “Best Management Book of the Year” by Strategy + Businessmagazine. Geoff’s latest book (released August, 2015) is called Humans are Underrated: What High Achievers Know That Brilliant Machines Never Will. It’s based on the idea in his wildly popular article in the 2014 Fortune 500 issue – “In The Future Will There Be Any Work Left for People to Do?” It looks at the trend of technology displacing more jobs than it creates and the ways humans will create value for their organizations and their careers in the changing economy. The ideas he shares have profound implications for every business and industry.

A native of Vermillion, South Dakota, Geoff Colvin is an honors graduate of Harvard with a degree in economics and has an M.B.A. from New York University.

RECALIBRATE: HOW TO SUCCEED IN THIS BUSINESS CLIMATE
As business leaders face their biggest challenge ever, Geoff Colvin arms audiences with insights to help them lead their organizations into the future. He connects the dots to provide an unparalleled update on the economic, political, technological, and competitive forces driving business disruption – and opportunity. Geoff has an important message for business leaders gleaned from 40 years at Fortune: the companies who win most often have leaders who summon the courage to act in spite of great uncertainty. Those leaders stopped protecting the past and started inventing the future – and they did it faster than the competition. Geoff reveals how the most successful leaders are confronting and adapting to this business environment right now. Winning in business today demands extraordinary leadership acting on the best intelligence it can find. Geoff provides valuable insights wrapped in a message that is optimistic and energizing: Opportunity is more widely available than ever, he says, and someone is going to win – why shouldn’t it be you?

HUMANS: THE ULTIMATE COMPETITIVE ADVANTAGE
The coronavirus pandemic launched many companies that weren’t ready into a world of virtual work. It also transformed the way we think about relationships in the process. Couple that with robots and smart machines doing more of the work humans used to do – and doing it faster, cheaper, and better – and you have to ask: what’s the future of work and how do humans fit in? Based on research for his New York Times bestselling book Humans are Underrated, Geoff Colvin helps audiences understand how work is changing and the critical skills they’ll need most to adapt and compete going forward. The key skills are those of social collaboration: storytelling, social sensitivity, brainstorming, creating and innovating with others, leading, and above all – empathy. Geoff reveals what top organizations are doing now to build a competitive advantage by strengthening these capabilities.

REBUILDING THE ECONOMY – AN UPDATE
No one could have imagined the turn of economic fortunes that took place in 2020. Coming back from such economic devastation will take time and every business leader is looking for valuable insights to help set their strategic course of action. In this talk, Geoff Colvin briefs his audience on where the U.S. and global economies are going. Trade, monetary policy, fiscal policy, government regulation, and global dynamics all factor into the equation. With Washington already having provided trillions of dollars in stimulus, what does the future look like and how should business leaders navigate the path forward? This is a timely talk updated with headlines from the day’s news.

TALENT IS OVERRATED – HOW GREAT PERFORMERS REALLY GET GREAT
Suppose most of what we believe about hard work and raw talent is wrong. That would mean most of us will never have the chance to perform as well as we could. Geoff Colvin, author of the groundbreaking international bestseller Talent Is Overrated: What Really Separates World-Class Performers from Everybody Else, explains the surprising truths about great performers and relates them to real life in real organizations. He shows how most organizations value the wrong things – passion, honesty, and learning are more valuable than hours, IQ, or “native ability.” Geoff demonstrates that world-class performance comes from behaviors that every person and organization can adopt. Those who apply these principles gain a tremendous competitive advantage. Geoff cites relevant examples to prove it and to launch an important conversation in your organization.

PANEL MODERATOR, DISCUSSION LEADER, EMCEE/HOST
Geoff Colvin’s unique gift is his ability to brilliantly moderate panels, lead onstage interviews, and host/emcee. He’s played these roles for more than three decades at Fortune conferences worldwide. Top companies and associations regularly utilize Geoff because he gets the most out of participants; he asks the right questions, listens intently to what’s being said on stage, and responds to that. He also connects ideas and insights across sessions, transforming a multi-part program into a satisfying, unified whole. He always keeps the discussion relevant and the energy high.

Speech Topics: Competition   Economics   Global   Leadership   Peak Performance   Technology   Virtual Presenter
Our goal is to provide speakers that encourage, entertain, and educate, YOUR audience! Work with Preferred Speakers to book the perfect speakers and entertainers for YOUR event!
Get In Touch
© Copyright - Preferred Speakers - 2022
Back To Top