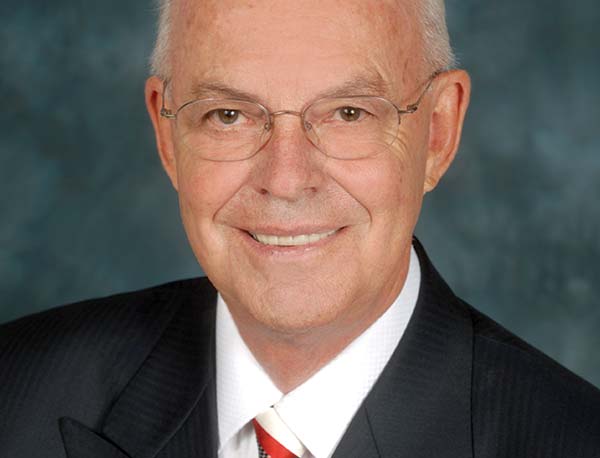 He is the former CEO of the highly successful Southwest Airlines whose foundation and culture placed people first. Later, when recruited to be the CEO of failing Braniff International, he was the first CEO to successfully restructure a major airline into, through, and out of Chapter 11. Earlier he spent over twenty years with United Airlines, his final position being Group VP of Marketing.

He has been an entrepreneur, the chairman of a startup management and investment company, and is the co-founder, in 1998, and Chairman of Aircraft Interior Resources (AIR) in Houston. He is an author, commentator, speaker and advisor on business issues, change, leadership and ethics. HarperCollins published his first book, “The Winds of Turbulence” on leadership and ethics. Harvard University wrote a case study on his Braniff experiences, “The Ethics of Bankruptcy.” It is a teaching model for handling all stakeholders honestly and ethically in crisis. Howard has an MBA in Marketing from the University of Chicago and attended Harvard’s Advanced Management Program.

Howard grew up on an Iowa farm and learned to fly out of a pasture. His wife Krista is a native of Ohio, a former flight attendant and they have been married 44 years. Their son Mike is an airline Captain based in Charlotte, and daughter Sue is in public relations and advertising in Reno. Howard and Krista live in the mountains near Reno and Lake Tahoe.

Leadership: Successful Strategies Through Turbulence
Leaders must have a clear and concise vision if they want their organizations to survive and thrive through turbulence. A clear understanding of what business or businesses you are really in is critical. Cultures can then be developed to support the vision and business. Bottom line improvement comes through your people. Howard Putnam has successfully led organizations through the maze following these principles of leadership and will share them with you.

Innovation: Creating a Culture and Process for Ideas to Hatch
Innovation and bold steps occur in organizations that embrace and foster a climate and culture for risk taking and idea implementation. Howard Putnam proved this philosophy works when he was CEO of Southwest Airlines. He positioned and organized Southwest for growth and profitability utilizing a very flat management structure with decision making and idea development imbedded in everyoneÕs job scope and responsibility. Individuals and teams were rewarded for risk taking and for designing out of the box processes and improvements in productivity, customer service, cost containment, safety and profitability. Brands develop when people thrive in the vision and experience. In this presentation he will describe how this can work in your organization.

Change: Transforming Organizations Successfully & Profitably
Many organizations are out of alignment in the current turbulent environment. Their design is outdated with bureaucracy and a hierarchy that is expensive and inefficient. Howard Putnam will show you how to transform your business into a Òflow stateÓ organization that is focused, nimble, flexible, cost effective and able to utilize the Òstages of turbulenceÓ which he will identify for you to take advantage of being in a change state.

People and Culture: Hiring Attitudes & Developing Their Skills
Successful organizations that are in business for the long term, place their people first if they want sustained bottom line improvement. Howard Putnam led the visioning process at Southwest Airlines in which a key element was the culture, putting their people first and matching attitudes with the culture. Happy employees and superior customer service resulted from this concept. He will share behind the scenes looks on how this was accomplished with great stories, humor and concrete suggestions for you.

Ethics: The Ultimate Challenge in Ethics; Are You Really the Person Your Dog Thinks You Are?
Organizations cannot ignore the need for proactive efforts to ingrain honesty, integrity and trust at every level. Today’s environment requires ethical leaders, if they want their businesses to survive and grow. Howard Putnam learned the values of trust and honesty as he grew up on an Iowa farm. He has embodied those principles in his successful business career. He took on the challenge of saving Braniff International only to find the “books had been cooked” prior to his arrival. He will share this character building experience of taking a major airline through Chapter 11 successfully and offer a flight plan for you to implement in your organization.

Speech Topics: Change   Change Management   Corporate Culture   Customer Service   Entrepreneurs   Ethics   Leadership   Success   Vision
Our goal is to provide speakers that encourage, entertain, and educate, YOUR audience! Work with Preferred Speakers to book the perfect speakers and entertainers for YOUR event!
Get In Touch
© Copyright - Preferred Speakers - 2020
Back To Top
×