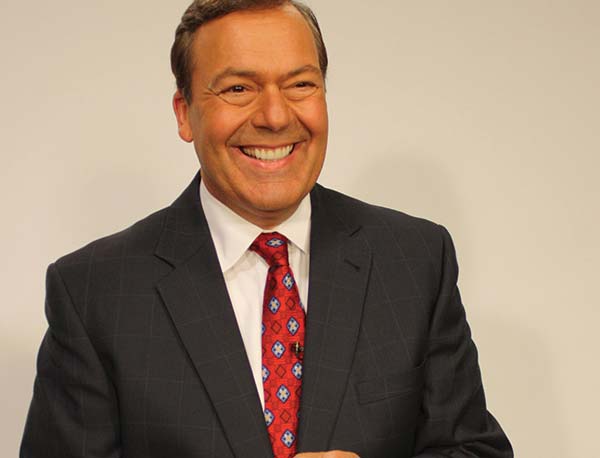 Inspirational Influence Speaker, Author SILENT IMPACT: Stories of Influence through Purpose, Persistence, & Passion
Whether in front of the camera or on the stage in front of 1000 employees of a Fortune 500 company, Joe Schmit delivers a customized and memorable presentation. His engaging stories and infectious humor will inspire you to laugh, think and make small changes that will have a huge impact on your professional and personal life.

Joe shows each audience his heart and leaves them wanting more. He has averaged more than 50 appearances a year over the past three decades, and is an active member of the National Speakers Association.

A winner of 15 Emmys from the National Television Academy, as well as a prestigious National Headliner Award, Joe has interviewed over ten thousand athletes and covered every major sporting event from the Super Bowl to the World Series. Currently the Sports Director of KSTP-TV, an ABC-affiliate in a top 15 market, Joe is also a regular on 1500ESPN Radio and hosts the Minnesota Twins Post-game Show. Even Hollywood recognizes his award-winning style, garnering his broadcast talent for an appearance in the major motion picture, “Untamed Heart.”

Joe serves in various leadership roles around the Twin Cities community where he has been an active resident for over 25 years. Currently, he and his wife Laura are leading a $7.2 million dollar capital campaign for VEAP, the largest food shelf in Minnesota. A Past President of Big Brothers, Big Sisters of the Twin Cities and of the Minnesota Fairway Foundation, Joe now serves on the Pacer Advisory Board and the Minnesota Vikings Advisory Board. Joe has received numerous awards for public service, including top community leader awards from such local organizations as Big Brothers, Big Sisters and the Juvenile Diabetes Foundation. A committed humanitarian, Joe established a Celebrity Golf Tournament that ran for 16 years, raising over 3-million dollars for at-risk children in the Twin Cities.

Good Enough Isn’t Good Enough if you Want to be the Best
Joe has conducted one on one interviews with the biggest names in sports from Tiger Woods to Michael Jordan to Wayne Gretzky. He has been sprayed with champagne in World Series Championship celebrations. He has covered Super Bowls, Final 4’s, US Opens, the Masters, Stanley Cups and on and on. He has also covered incredible tragedies from school shootings to the untimely deaths of celebrities he called friends. Joe will tell humorous and heartfelt stories that will leave your audience wanting more.

Humor
If your event calls for someone to make people laugh with jokes, short stories or videos, Joe Schmit is the speaker for you. If the message is fun, Joe will make sure your message is heard loud and clear.

Mr. MC
Over the past three decades, Joe has emceed over 1000 events. He is simply an A-lister if you an emcee who can make your event memorable. What ever is thrown at Joe, he is quick on his feet and will keep the program moving and interesting.

Speech Topics: Humor   Masters of Ceremonies, Emcees and Moderators   Motivation and Inspiration   Positive Attitude   Sports
Our goal is to provide speakers that encourage, entertain, and educate, YOUR audience! Work with Preferred Speakers to book the perfect speakers and entertainers for YOUR event!
Get In Touch
© Copyright - Preferred Speakers - 2020
Back To Top
×