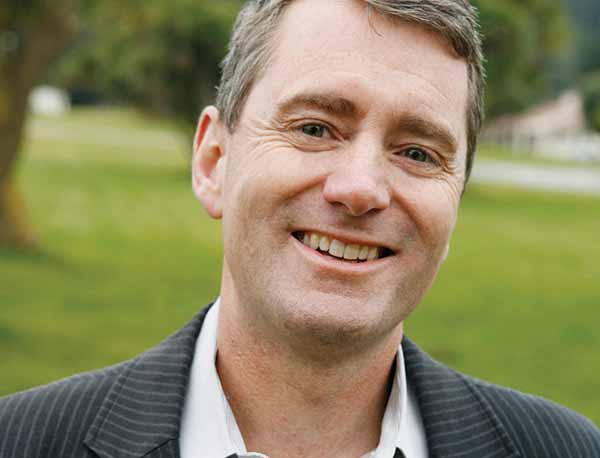 Founder and Board Co-chair of Room to Read
At age 35, inspired by visit to a dilapidated Nepali primary school with an empty library, John Wood left an executive career track at Microsoft to build one of the fastest-growing non-profits in history. In just 13 years and from a standing start, Room to Read has opened 1,675 schools and more than 15,000 libraries across ten developing countries. What's more, Room to Read is on track to meet an audacious goal: reach 10 million of the world's poorest children by 2015.

Today, John's real-world business acumen and drive to change the world have made him an inspiring and sought-after speaker with universal appeal. Since giving up the money and the perks of his former career, John has helped millions of children who have lost the lottery of life. John leverages what he learned in the business world to massively scale social change, and likes to say we run Room to Read with the heart of Mother Teresa and the scalability of Starbucks. Astonishingly, the organization did indeed open more libraries in its first decade than Starbucks did coffee shops.

John's role in building one of the fastest-growing non-profits in history has earned him broad acclaim, including a nod as one of Goldman Sachs' 100 Most Intriguing Entrepreneurs of 2013. He is a five-time winner of Fast Company's Social Capitalist Award, and was named one of Time Magazine's Asian Heroes “ the only non-Asian ever to win the honor. John has been recognized as a Young Global Leader by the World Economic Forum and a Henry Crown Fellow at the Aspen Institute, and sits on the advisory board of the Clinton Global Initiative where he's spoken three times. He's also received a Lifetime Achievement Award at the Tribeca Film Festival, and appeared with Pulitzer Prize-winning journalists Nicholas Kristof and Sheryl WuDunn in the award-winning documentary Half the Sky.

Getting Out Of Your Comfort Zone
In 1999, as Director of Business Development for Microsoft's Greater China Region, John Wood's comfort zone included a full-time car and driver, a subsidized luxury apartment, and a frenzied schedule of meetings, e-mails and last-minute dashes the globe.

That last part hasn't changed. But after stepping some six thousand miles out of his comfort zone into Nepal's Himalayas “ a world of book-barren libraries, ramshackle schools and illiterate children eager to learn“John abandoned his cushy lifestyle and executive career
In 23 years split between Microsoft's executive suites and the crammed schoolrooms of the developing world, John has come to understand the perils of the comfort zone and the empowerment that comes with leaving it behind. We get soft. We get complacent. And that's the death knell for soon-to-be-great organizations. John speaks from experience“in swapping the boardroom for the schoolroom, he stepped further out of his bubble than he'd ever thought possible.

Today, after helping educate nearly 8 million children in 10 developing countries, John is living proof that opportunity awaits those with the audacity to venture beyond familiar boundaries. Companies, like people, can be drawn to the habitual and the routine. But in his talks to audiences around the world, John dares his listeners to look beyond business as usual, and argues that while good organizations find strong solutions to old problems, the great ones find exciting new problems to solve as well.

Re-Imagining Leadership
Today's world faces an unprecedented crisis of leadership. From our financial institutions to our governments, faith in our leaders is at or near an all-time low. At the same time a war for talent rages, with the most visionary and inspiring leaders building the most effective teams. In this ever-changing environment, it isn't enough for us to simply rethink leadership “ we must re-imagine it altogether.

Eager to implement his own vision at age 35, John Wood left an executive career track at Microsoft to build a new kind of non-profit “ one founded on the principles of ROI maximization, massive scalability and absolute uncompromising transparency. The result is one of the fastest-growing non-profits in history, with an army of more than 10,000 volunteers and supporters who share Room to Read's private-sector pragmatism and John's burning drive to change the world.

Now John teaches managerial courage in classrooms and business conferences around the globe. Speaking to MBA students and executives alike, he inspires audiences to think differently and more boldly about what they can accomplish as leaders. He insists that audacious goals attract audacious people, and that when they work together in an organization that inspires and recognizes innovation, there are no problems they can't solve.

John contends that leaders must be continually disruptive “ finding better ways to do business and challenging not only their organizations, but themselves in a quest for continual improvement. His brand of leadership balances an uncompromising commitment to the bottom line with deep organizational humility “ a willingness to acknowledge problems and consider solutions no matter the source. At Microsoft, that might have been a junior employee's fix for an inefficient supply chain. At Room to Read, it could be a volunteer's plan for a farmer's market to wean rural libraries off foreign aid. In both cases “ and in all cases “ the best idea must win the day.

Scaling Success: Lessons on Growth, Scalability and Continuous Improvement
It had never been done before. When John Wood left Microsoft to found Room to Read, other non-profits had built libraries in developing coun- tries, but never on a scale commensurate to the size of the problem. Nearly 800 million people can't read or write, and John was determined to bring that number down.

John likes to say we run Room to Read with the heart of Mother Teresa and the scalability of Starbucks, and astonishingly, the organization did indeed open more libraries in its first decade than Starbucks did coffee shops. John's model is flex- ible enough to adapt to different regions, incorporates iterative improvements over time, and makes good financial sense, calling on communities to fund half the cost of their new schools and libraries and give them ownership of their own success. Just as importantly, Room to Read empowers people to create small self- propelling changes at the community level; taken together, these changes cultivate a home-grown capacity that keeps projects running long after foreign assistance shifts elsewhere.

The result: by any measure, John's strategy has been a triumph. In 13 years, Room to Read has grown to build 15,000 libraries and 1,675 schools, distributing 13.5 million books and publishing 1,000 original local-language titles along the way. The model has been adjusted to fit 10 developing nations, and Room to Read now includes more than 50 chapters worldwide.

Today, John shares his model for massively scalable growth with business, university and non-profit audiences around the world. His experience has made him an authority on overcoming the obstacles of culture, language, geography and technology to grow a truly global organization, and his insights on the promises and pitfalls of rapid expansion “ gleaned through experience, intuition and trial and error “ are sought by leaders everywhere.

Speech Topics: Change   Education   Inspiration   Leadership   Social Responsibility
Our goal is to provide speakers that encourage, entertain, and educate, YOUR audience! Work with Preferred Speakers to book the perfect speakers and entertainers for YOUR event!
Get In Touch
© Copyright - Preferred Speakers - 2021
Back To Top