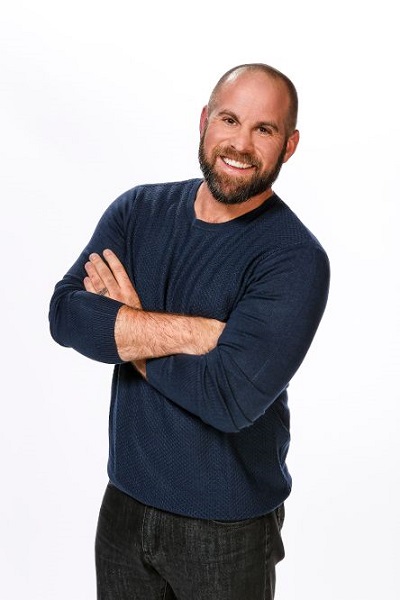 Jon Dorenbos' past has made him the man he is today. In August, of 1992, at the age of 12, his father murdered his mother. His father was convicted of 2nd degree murder and was sentenced to 13 years in prison. After the completion of his father’s trial he and his sister, Kristina, moved in with a temporary foster family, the Robsons, to allow them to finish their respective school years. Following the school year, Jon and Kristina moved from Woodinville, WA, to Garden Grove, CA, to live with their Aunt Susan. At the time, Susan, had no children and took Jon and Kristina in as her own. She devoted her life to her sister's kids and became the best mom anyone could ask for.

Jon got into magic just before his 13th birthday. He instantly fell in love with it. Magic became an escape during a time of mourning and transition in his life. He was obsessed with the sleights and skills involved. He spent all day, every day, practicing and rehearsing in front of the mirror. Jon's Aunt Susan, had a friend, Ken Sands, who was a magician and she made the introduction. Ken became a mentor, a friend and a father figure for Jon for years to come. Ken didn't just teach Jon the fundamentals of a trick, he taught him how to find himself as a performer.

“I was staying with friends in Woodinville, Washington and their neighbor was a magician. He was a 16 year old named Michael Groves. That was the first time I had ever seen a magician perform. Cards, coins, sponge balls and fire. What more do you need? Nothing. He inspired me to learn magic. Then I saw David Copperfield on TV and that inspired me to be a magician and a performer. People ask me all the time, ‘What is your favorite trick?’ In 1993, David Copperfield was touring with his show called Fires of Passion. He had a TV special and I watched it. I will never forget this. He brought a woman on stage and sat her on a stool. He explained that when he was a little kid he wore little shoes that he called Air Coppers. He takes his baby shoe and puts it in his back pocket. He borrows a ring and makes the ring disappear with such ease. His hands never left his side. He explained that when he was a little kid he would make his friends rings disappear and reappear tied in the laces of his shoes. Sure enough, he turns around and the ring is tied in the lace of his little shoe. By far, my favorite trick of all time. I owe a big THANK YOU to Mike Michaels for introducing me to David Copperfield and getting me a private tour of his warehouse, it was a dream come true. I love the art of pickpocketing. My favorite pickpocket is Apollo Robbins. If you've never seen him, Google him!”

“On a personal note, I'm sorry if I disappoint you. I can’t levitate in the middle of Times Square or push over a palm tree in Vegas with my finger. But what I can do... is have a good time. My favorite magician and mentor, Ken Sands, is a genius. He would work with me and give me subtle hints trying to help me discover who I was as an artist. And let me tell you, it took me a long time to figure out who I was as a performer. After watching Ken perform for so many years, it finally hit me! I finally figured it out. For me, it’s not just about the magic. Magic is a tool to develop a relationship with the audience. It’s about inspiring people, having fun and rockin’ a crowd.”

LIFE IS MAGIC
Jon is one of the most sought after Keynote Speakers on the circuit.  His presentation, LIFE IS MAGIC, is truly one-of-a-kind.  Weaving his inspirational story with world-class magic,  his energy is contagious and his passion for life infectious.

After losing both parents at the age of 12, Jon spent a year in foster care before moving in with his Aunt Susan.  With the attitude of “Live in Vision, not in Circumstance”, Jon rose above all odds to eventually earn two Pro Bowl appearances and a Super Bowl ring in his 14 year NFL career.  Jon was forced to retire from the NFL when the New Orleans Saints diagnosed him with a life-threatening heart condition that required emergency open heart surgery.  When asked about it, Jon saw the ‘magic'.

“I was traded to New Orleans and my life was saved by a Saint. All of us have experienced hard times in our life.  That’s something all of us can relate to. We then make a decision, do we become victims or do we become people of vision?  That decision is what separates us.”

Jon placed 3rd on NBC’s hit TV show, America’s Got Talent, and is a regular on the ELLEN DEGENERES Show.  He was honored when asked to compete on America’s Got Talent: The Champions Edition, and making it to the finals recognized him as 1 of the top 10 acts in the world.  His book, Life Is Magic, is scheduled to be released in 2019 by Simon & Schuster and Academy Award nominated producer, Mike Tollin, is in the process of making a major motion picture based on Jon’s life.

Companies’ messages and objectives can be seamlessly incorporated into the keynote

Speech Topics: Accountability   Change   Leadership   Overcoming Adversity   Teamwork   Virtual Presenter   Vision
Testimonials:
“Jon is by far the most powerful, engaging, dynamic and authentic presenter I have ever hired in my 15+ years of producing conferences and events. You’ll laugh, you’ll cry, you’ll remember what really matters in life and you’ll leave inspired to make a difference. This guy is for real.”
MICHAEL CLARKE
Director GSO B2B Marketing & Events, The Americas
Marriott International
Marriott International Luxury Brands
Our goal is to provide speakers that encourage, entertain, and educate, YOUR audience! Work with Preferred Speakers to book the perfect speakers and entertainers for YOUR event!
Get In Touch
© Copyright - Preferred Speakers - 2020
Back To Top
×