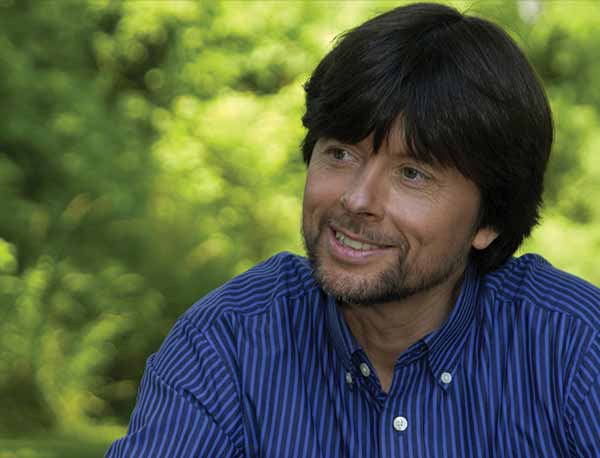 Award-winning documentary filmmaker
An award-winning documentary filmmaker, Ken Burns has directed film projects such as The Civil War, Baseball, The West, The War, and The National Parks: America's Best Idea, all of which were developed for PBS. The late historian Stephen Ambrose said, "More Americans get their history from Ken Burns than any other source." While The New York Times has called Burns "the most accomplished filmmaker of his generation."

With his series, The War, which premiered in the fall of 2007 on PBS, Burns cements his rightful place in the pantheon of American filmmakers. The film explores the United States’ involvement in World War II by way of first-person narratives by men and women who experienced the war firsthand, in the European and Pacific theaters and on the home front. Over the course of the hundreds of on-camera interviews that Burns and his team conducted, and after years of sifting through archival photographs, Burns learned an enormous amount about the experiences that were common to all those who saw combat (“I was scared. I was bored, I was hot, I was cold. I saw bad things. I did bad things. I lost good friends.”) His documentary tells incredible one-of-a-kind stories that people have kept locked away in their memories for six decades.

This film was an urgent one for Burns to make. He found that a thousand veterans of World War II die each day in America, and their memories will be lost with them unless we act soon. Moreover, in making this film, Burns repeatedly found himself paraphrasing Arthur Schlesinger Jr. to describe our experience with war then and now: as a people we have “too much pluribus and not enough unum.” Many say that we can credit Burns, his films, and his exuberance in sharing knowledge for bringing us closer to “unum,” however much further we have to go. Indeed, an estimated 43 million viewers have watched the series.

Burns calls individual experience the “DNA of our history.” He lives and works by that credo, and is known for capturing the “big ideas” of our country by way of his focus on telling details and first-person stories. He is not a historian, but his career as a filmmaker, storyteller, and chronicler of the American experience mean that he has a wealth of knowledge about our history. In his films, books, and lectures he helps us understand where we’ve been, where we may go from here, and even what America means.

Sharing the American Experience
Documentary filmmaker Ken Burns’ electrifying and unusually moving words remind audiences of the timeless lessons of history, and the enduring greatness and importance of the United States in the course of human events. A spellbinding orator, he engages and celebrates what we share in common.

No Ordinary Lives
Drawing on some of Lincoln’s most stirring words as inspiration, this speech engages the paradox of war by following the powerful themes in two of Ken Burns’ best known works: The Civil War, his epic retelling of the most important event in American history, and The War, his intensely moving story of WWII told through the experiences of so-called ordinary people from four geographically distributed American towns.

Race in America
For more than 30 years, Ken Burns has been dealing with the theme of race in his uniquely American documentaries. Now, in the age of Obama, he looks back from the perspective of monumental change in the country to reflect on where we’ve been. (Includes several clips from earlier films).

The National Parks
Ken Burns discusses, in this unusually moving and personal lecture, the great gifts of our national parks. Here, both “the immensity and the intimacy of time” merge, as we appreciate what the parks have added to our collective and individual spirit. (Presentation begins with a 13-minute clip from The National Parks: America’s Best Idea).

Speech Topics: Celebrity   Environment   Filmmakers   Historians   Performing Arts
Our goal is to provide speakers that encourage, entertain, and educate, YOUR audience! Work with Preferred Speakers to book the perfect speakers and entertainers for YOUR event!
Get In Touch
© Copyright - Preferred Speakers - 2022
Back To Top