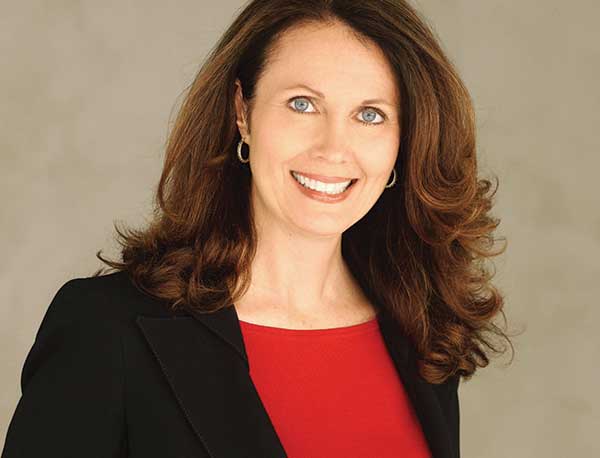 After nearly twenty years in senior leadership roles in communications at media giants Universal, Sony and Turner Broadcasting, Libby is now CEO of executive coaching and consulting firm Libby Gill & Company. A sought-after international speaker, Libby was also the PR/branding brain behind the launch of the Dr. Phil Show.

Libby Gill knows change. She grew up on two continents and went to eight different schools before putting herself through college waiting tables. Starting her career as an assistant at Embassy Communications, a television company founded by the legendary producer Norman Lear, in just five years Libby went through three mergers and arose to become head of publicity, advertising and promotion for Sony’s worldwide television group.

After a decade at Sony, Libby went on to lead public relations and corporate communications at media giants Universal and Turner Broadcasting. She exited the corporate world after nearly fifteen years in leadership roles to become a first-time entrepreneur in her forties, founding Libby Gill & Company, an executive coaching and leadership consulting firm based in Los Angeles.

For the past 20 years, Libby has guided clients to lead their teams through change, challenge, and chaos. She shares the science-based concepts of hope theory to provide the future-focused vision and positive engagement individuals and organizations need to compete in today’s swiftly changing world. In her executive coaching, leadership consulting, and keynote presentations, Libby guides others to:

· Reframe change as an opportunity for massive growth

· Re-energize your top talent to reach their full potential

Libby is the author of six books, including the award-winning You Unstuck; Traveling Hopefully; Capture the Mindshare, and The Hope-Driven Leader, with Leadership Reckoning to be published in 2021.

A frequent media guest, Libby has shared her success on CBS Early Show, CNN, Inside Edition, NPR, the Today Show, and in BusinessWeek, Good Housekeeping, O Magazine, Self, The New York Times, Time, Wall Street Journal, and many other media outlets.

Libby, who lives with her husband in Los Angeles, is Vice Chair of Didi Hirsch Mental Health Services, which developed the nation’s first Suicide Prevention Center and is the national leader in suicide prevention.

THE JOURNEY OF CHANGE THROUGH THE LENS OF HOPE

Libby delivers an inspiring message about the science of hopefulness, called hope theory, and its application to the workplace in challenging times. Sharing powerful stories, relevant case studies, and evidence-based strategies about the journey of change, she helps your organization reframe change as opportunity.

Her takeaways guide your group to:

LIFT AS YOU CLIMB: THE LATEST ON WOMEN’S LEADERSHIP

Libby guides emerging and established women leaders through workplace challenges including career advancement; gender bias; visibility and exposure; connection-leveraging; and work/life balance. With intelligence and humor, she shares an inspirational blend of leadership strategies and hard-won secrets to success.

Participants will discover how to:

A deep dive into Libby’s proven four-step “True Hope Process,” that moves your team from clarifying their one-year vision; simplifying the path to reaching the desired outcome; executing the action plan; then reviewing and refining the plan for future growth.

This program can also be presented in four weekly installments for maximum connection and accountability to action.

YOU UNSTUCK: CREATING A CULTURE OF RISK-TAKING

A powerful session for identifying and reframing fear as fuel for growth so that organizations can create cultures where team members are willing to take risks, make mistakes, and develop new strategies for the future.

Highly interactive session where Libby guides participants to situationally broaden their leadership skillset by learning four key leadership styles, identifying their default style, and mastering the ability to toggle among styles depending on the circumstances.

Speech Topics: Accountability   Entrepreneurs   Leadership   Motivation and Inspiration   Success   Teamwork   Virtual Presenter   Women Today
Our goal is to provide speakers that encourage, entertain, and educate, YOUR audience! Work with Preferred Speakers to book the perfect speakers and entertainers for YOUR event!
Get In Touch
© Copyright - Preferred Speakers - 2020
Back To Top