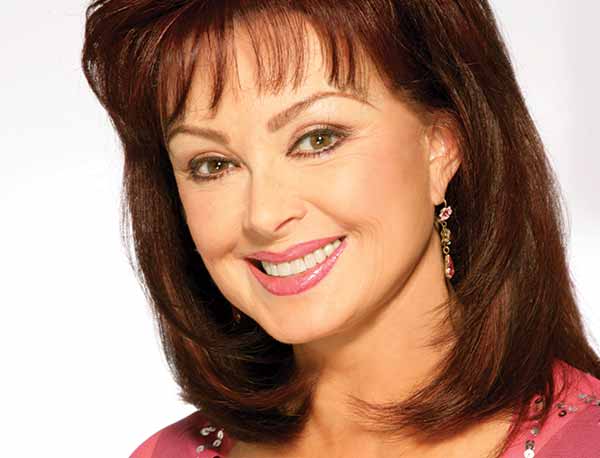 Country Music Star, Inspirational Speaker, Author
Naomi Judd is a tour-de-force. She made country music history and charmed Hollywood, but her story is far more than a heart warming rags-to-riches tale. It is a quintessentially American lesson in perseverance and the life-altering power of positive thinking. The single mom and registered nurse from small-town Kentucky first captured the hearts of the world performing with her daughter Wynonna.

The Judds sold 20 million records, scored fifteen #1 hits, and received more than sixty industry awards, including six Grammys and seven consecutive CMA Vocal Group of the Year trophies. But, the incredible journey of the mother-daughter duo was cut short when Naomi was stricken with Hepatitis C, a potentially fatal chronic liver disease that she contracted from an infected needle while working as a nurse. The Mayo Clinic gave Naomi three years to live, and in 1991, The Judds bid their fans farewell.

Instead of submitting to her devastating diagnosis, Naomi fought back, both physically and mentally. Today, she is more than a survivor. She is Hepatitis C-free”a medically documented miracle. Along with the combination of her medical teams and the unyielding support she received from friends and colleagues, she attributes much of her amazing recovery to her own stubborn optimism. In addition to profoundly changing her life personally, the experience led Naomi to her current mission: to empower people through holistic health and wellness advocacy that incorporates the mind, body, and spirit. Naomi's tenacity, empathy, and intellectual curiosity have made her the ideal bridge between medical leaders and everyday people. She understands the concerns and fears of the single mom and the sick, the poor and the downtrodden, because she has traveled those same roads. œMy message is to help people understand that our thoughts can help us or hurt us, Naomi says. œWhatever we believe becomes our biology.

In 2004, Naomi published the self-penned Naomi's Breakthrough Guide: 20 Choices to Transform Your Life, which remained on the New York Times bestseller list for more than eight weeks. Naomi's Guide to Aging Gratefully: Facts, Myths, and Good News for Boomers hit shelves and impressed critics, medical professionals, and fans in 2008. In 2012, she hosted a six-week SiriusXM radio series entitled œThink Twice. The first national spokesperson for the American Liver Foundation and a current member of Dr. Andrew Weil's board of directors, Naomi is a sought-after partner for social awareness caigns and associations. She is also an accomplished children's and cook book author, veteran talk show host, and versatile actress. Music and mentorship remain two of her deepest passions, evidenced when she helped launch CMT's reality music competition Can You Duet in 2008 and 2009, along with her 2010 reunion with Wynonna, œThe Judds: The Last Encore Tour, chronicled by the hit docu-series œThe Judds, which aired on OWN: The Oprah Winfrey Network in 2011.

Eight Characteristics of a Survivor
Loss of your job, a health crisis, and failing relationships are just a couple of the common drivers of personal crisis that cause feelings of loss of control of your life. Learn how to not only survive but thrive amidst personal difficulties as Naomi discusses the eight characteristics of survivors from having a support system to having a purpose in your life.

How to Have a Breakthrough, Not a Breakdown
Given only 3 years to live when diagnosed with hepatitis C and forced to leave behind her musical career during the pinnacle of The Judds' success, the now recovered Naomi Judd shares her hard-won wisdom that peace of mind isn't the absence of a problem, it's in finding the proven ways to deal with them. This speech is inspired from her New York Times bestselling book, Naomi's Breakthrough Guide.

Aging Gratefully
Inspired by her book, Naomi's Guide to Aging Gratefully, this lecture presents facts, myths, insights and good news for Boomers in a delightfully entertaining way through a message of looking for more meaningful ways we can define ourselves so we can enjoy aging.

Speech Topics: Adversity   Aging   Attitude   Celebrity   Challenge   Humor   Inspiration   Personal Growth   Women Today   Women's Health
Our goal is to provide speakers that encourage, entertain, and educate, YOUR audience! Work with Preferred Speakers to book the perfect speakers and entertainers for YOUR event!
Get In Touch
© Copyright - Preferred Speakers - 2021
Back To Top