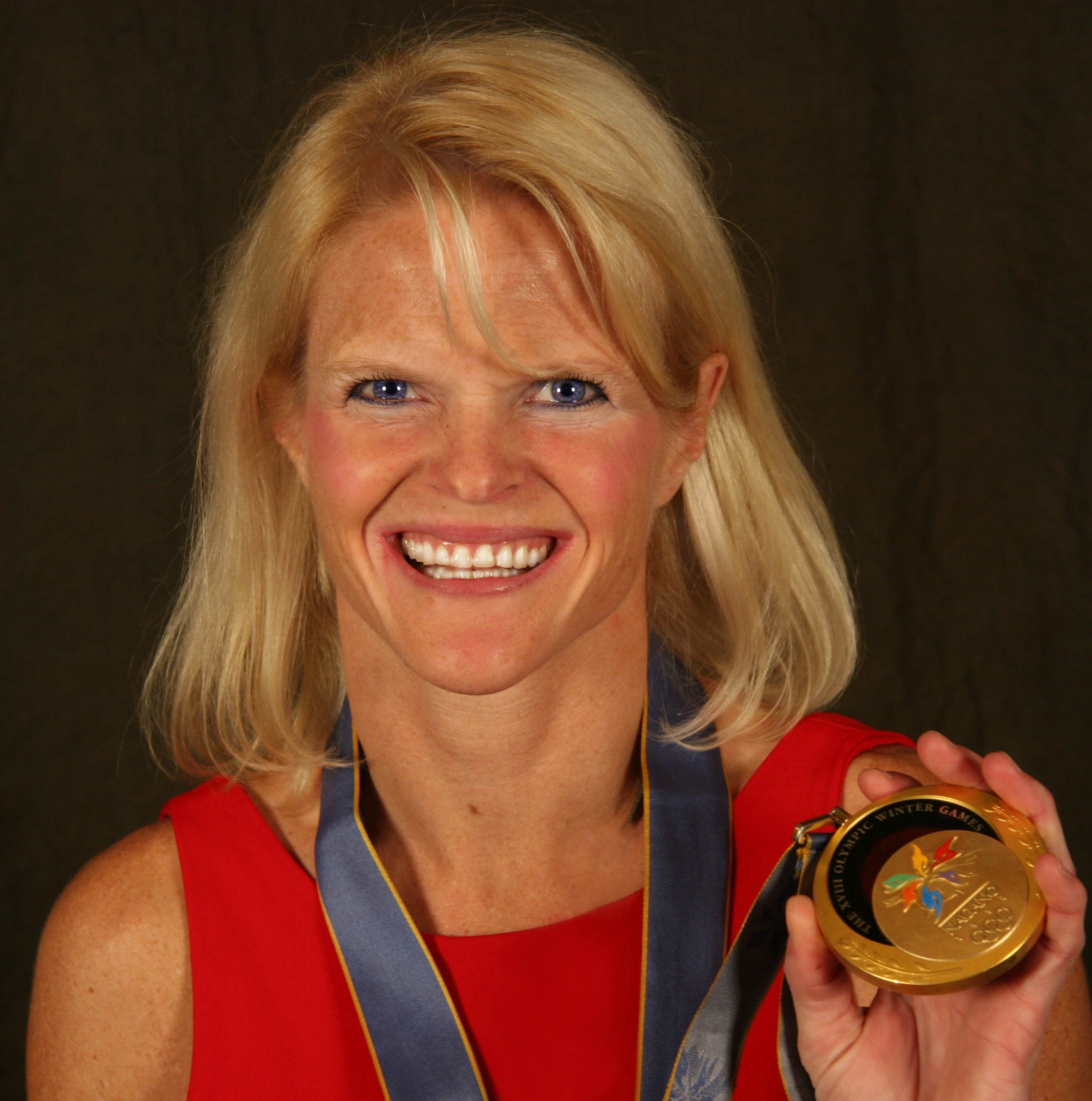 Olympic Gold Medalist and Award-winning Motivational Speaker Nikki Stone is available for both in-person and virtual speeches. Hire her to hear her captivating Olympic journey overcoming adversity, risk taking and attitude of a CHAMPION!

An American Hero
At the Olympic Winter Games in Nagano, Japan, Nikki Stone became America’s first-ever Olympic Champion in the sport of inverted aerial skiing. What made this performance so unbelievable, was the fact that less than two years earlier, a chronic injury prevented her from standing, much less walking or skiing down a slope at almost 40 miles per hour.  Nikki came dangerously close to being sidelined from aerial skiing indefinitely.Her tenacity and refusal to step down from a challenge brought Nikki Stone back to the top of the freestyle skiing podium. This top spot was far from foreign to Nikki, as throughout her career she earned 35 World Cup medals, eleven World Cup titles, four national titles, two yearlong Aerial World Cup titles, and a World Championship title.  She also became the first pure aerialist ever—male or female—to become the yearlong Overall Freestyle World Cup Champion.

Inspirational Speaker
Nikki now travels around the world working as a sought-after inspirational speaker sharing her secrets to success. She encourages and inspires her audiences to find their Turtle Effect by realizing their passions, triumphing over obstacles and take life-enhancing risks, like she did, to reach extraordinary goals that may initially seem unattainable.  Nikki has also parlayed her success on the stage or at the podium into an inspirational personal development coaching program. Nikki is personally teaching individuals and groups the tools and skills they need to make infinite improvements in the workplace and in their personal lives. Nikki was also hired to motivate and support the contestants of the Regional Biggest Loser program.

Motivational Speaker & Trainer
Because of Nikki’s in-depth research and implementation of the tools to success, the U.S. Olympic Committee engaged her to help train the athletes on overcoming challenges, finding motivation, and dealing with these pressures at the Olympic Games.  And due to her constant referrals as a motivational speaker, the United States Olympic Committee also contracted Nikki to train the Olympians in speaking, presentation, and mentoring skills.

Bestselling Author
Nikki’s new, empowering book, When Turtles Fly: Secrets of Successful People Who Know How to Stick Their Necks Out, was recently honored as an Amazon bestseller.  Nikki was recently invited on the Today Show to share the success of the book.  When Turtles Fly includes inspirational stories from successful individuals from all different arenas (politicians, actors/actresses, Fortune 500 business executives, musicians, bestselling authors, athletes, Nobel Prize winners, etc) and after each story, Nikki gives readers different activities that they can perform to help reinforce the behavior needed for success in their own business and lifestyle.  Stone also writes articles and columns for a number of magazines, newspapers, and websites.  Nikki is also a contributing author to the inspirational book Awaken the Olympian Within: Stories from America's Greatest Olympic Motivators.

Giving Back
Nikki’s contributions span far beyond her professional careers, as she devotes time to charities such as “Right To Play”, “The Make-A-Wish Foundation” & “American Cancer Society”, hosts group skiing adventures, and participates in numerous sponsor promotions for major national and international companies.  She has also remained very involved philanthropically by sitting on five different Olympic, sport, and charitable committees.

Personality +
You may have seen Nikki through her numerous television appearances on such shows as Late Night with David Letterman, The Today Show, Good Morning America, CNN Early Addition, MSNBC Morning Line, ESPN’s Cold Pizza, FOX News Sports Express, CNN Business As Unusual, and FOX Sports News live.  You could have also caught Nikki in one of her nationally televised commercials for companies like Chevrolet and the Salt Lake Olympic Committee.

Last but certainly not least...
Nikki now resides in Park City, Utah with her husband and two children and continually works to help people stick their necks out to reach whatever their gold medal may be.

THE CHAMPION’S PATH TO LEADERSHIP AND DRIVE: The Strategies and Tools for Everyone to Be a Champion and Increase Productivity and the Bottom Line

As the old saying goes “champions aren’t born, they are made”.  Olympic Gold Medalists have reached a level of success that very few people in the world have achieved. The path to strong leadership starts by setting a culture of performance and excellence, particularly in high pressure moments.  Olympians constantly look to understand their strengths and how they can improve their weaknesses.

Learn how to be at your best from someone who studied and lived this for decades. Nikki will help attendees:

The participants will recognize and be able to apply the skills it takes to be a champion in the workplace. Nikki will help guests increase output, become more productive and learn their true potential through a motivating and captivating story.

THE ART OF THE ADVERSITY COMEBACK:
The Strategies and Secrets to Resilience, Revival and Renewal

The people who have risen to the top and stayed at the top have world-class resilience.  People with a vision and desire can overcome everyday challenges, just like when Champions overcome changing situations. We all possess the ability to be resilient and overcome life's challenges when we have the proper tools.

Nikki did four things that anybody can learn to do:

Just 18 months before the Olympic Games, more than 10 doctors told Nikki she should quit and never ski again. If she did, she risked permanent spinal damage and much worse. With her four-step plan she overcame her challenges and won America’s first gold medal in aerial skiing.

In this highly acclaimed program, Nikki gives everyone the insider, behind the scenes story and her clear strategies for success. Your personal leadership plan includes a clear vision and focus, path to persistency, a winning attitude and a strong team. She has learned that we need to determine where we are going and why it matters.  Nikki expresses the importance of setting the attitudes, mindsets, policies, practices and expectations for the culture of discipline.

Experience the remarkable story of overcoming life threatening injuries to achieving the lifelong dream of winning the coveted Olympic gold medal. You will remember and relate to the extraordinary journey of a young athlete hitting rock bottom and learning the essential revival skills and mindset to catapult her beyond what anyone thought imaginable. Gain inspiration from the uplifting ascent of true heartache to explosive passion and pride.

Olympic champions have mastered world-class resilience.  You can learn these skills from a champion that was virtually counted out by everyone. These strategies and hands-on activities will assist you and your people to use your collective knowledge to change your way of looking at the world. Realizing this strong, rational optimism and the can-do Olympic Spirit that is inside each of us, you will find that your potential is limitless.

BUILDING A WINNING TEAM:
How To Create a Results-Driven Team With Purpose, Focus and Balanced Leadership

The U.S. Team has always been a force to be reckoned with at the Olympic Games.  They have become a robust powerhouse because they have learned a clear understanding of developing strong communication, conflict resolution, trusty leaders, mutual compassion, cooperative goals and compelling buy-in.  These are the same skills that make a powerful AND proud business entity.

It is essential to figure out the ties and communication that will give everyone their greatest support and produce the strongest collective results. Just like employees in a business or organization, Nikki understands that an individual sport athlete sets personal goals but it takes everyone to help us succeed and the awards are won for the team. Let Nikki help your team:

Nikki’s program highlights the need for personal goals and milestones in order to drive the success of an organization. Every individual on the team needs to feel and recognize their own strengths to help contribute to the team.  But there needs to be an understanding of how these individual components fit together to develop a powerful organization in which they want to take ownership.

Nikki will help you develop the skills to build a stronger group or company through trust, support and understanding in order to produce a team that is both productive and gratified.

The event was fabulous… and your contributions were a huge part of that success! Your session scored a phenomenal 6.78 out of 7, with the majority of guests scoring it a perfect 7, and 99% of attendees scoring it a 6 or 7. No one has ever received results this high!