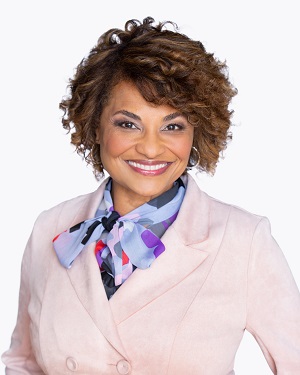 Roxane Battle Vice President of Advocacy and Community at AbleTo, Inc., a leading behavioral health company based in New York.  She is a veteran television journalist, public speaker, author and mom. Her award-winning memoir, Pockets of Joy: Deciding to Be Happy, Choosing to Be Free (Whitaker House 2017), became an Amazon best-seller in multiple categories.

Roxane Battle is Vice President of Advocacy and Community at AbleTo, Inc., a leading behavioral health company based in New York. She held the same position at Minneapolis-based Sanvello Health, Inc,  which has since integrated with AbleTo’s suite of digital behavioral heath care tools. You can see Roxane as host of “Checking in with Roxane Battle”  in Sanvello’s app, where she uses her gift of storytelling to help 4 million subscribers feel better.

Prior to her work as a mental heath care advocate, Roxane spent 20+ years as a television journalist, including work as an award-winning news anchor and Emmy-nominated reporter at NBC Minneapolis, CBS, and FOX.

Roxane was named an Architect of Change on mariashriver.com and has been featured in Working Mother and Ebony magazines.

An Amazon best-selling author, Roxane’s self-help memoir, Pockets of Joy: Deciding to Be Happy, Choosing to Be Free (Whitaker House 2017), is now in its third printing.

She enjoys cycling, owns a pair of rollerskates and makes a memorable mac and cheese.Follow her on LinkedIn and Instagram, at @roxanebattle

Pockets of Joy: An Attitude of Gratitude

Pockets of Joy: Seven Steps to Joy and Well-being

SYNOPSIS:  The only thing constant in life is change, yet human beings are instinctively wired to resist change. Often, we suffer our way through loss, or transition, rather than embrace change as an opportunity for personal growth and development. What if we could learn to manage the transitions in our lives in a way that also allows us to find joy? In this inspirational talk, former KARE 11-TV personality and award-winning author Roxane Battle blends elements of positive psychology and mindfulness with personal stories of her journey in transitioning out of a high-profile television career into a new and fulfilling life. It’s a journey that resulted in real-life lessons and authentic happiness. Through candor, humor and expert storytelling Ms. Battle will equip attendees with tools to help them see life’s challenges not as obstacles, but as opportunities to experience authentic joy.

Roxane Battle set the tone of our conference with her keynote speech in a wonderful way. Her presentation was positive and optimistic while still being down-to-earth and thought-provoking. Our audience absolutely loved her. A few people asked me to send over the booking agent's information right away so they could have her at future events!
MAWB

Roxane offered key points to support mental health and advance work around equitable healthy environments.  She delivered her message with expertise and presence.
Edina High School
Roxane Battle was a great presenter, fun to listen to and offered an uplifting message with good tidbits to help center in stressful times. She is personable and relatable. Great speaker with a great message.
MASBO
Books: