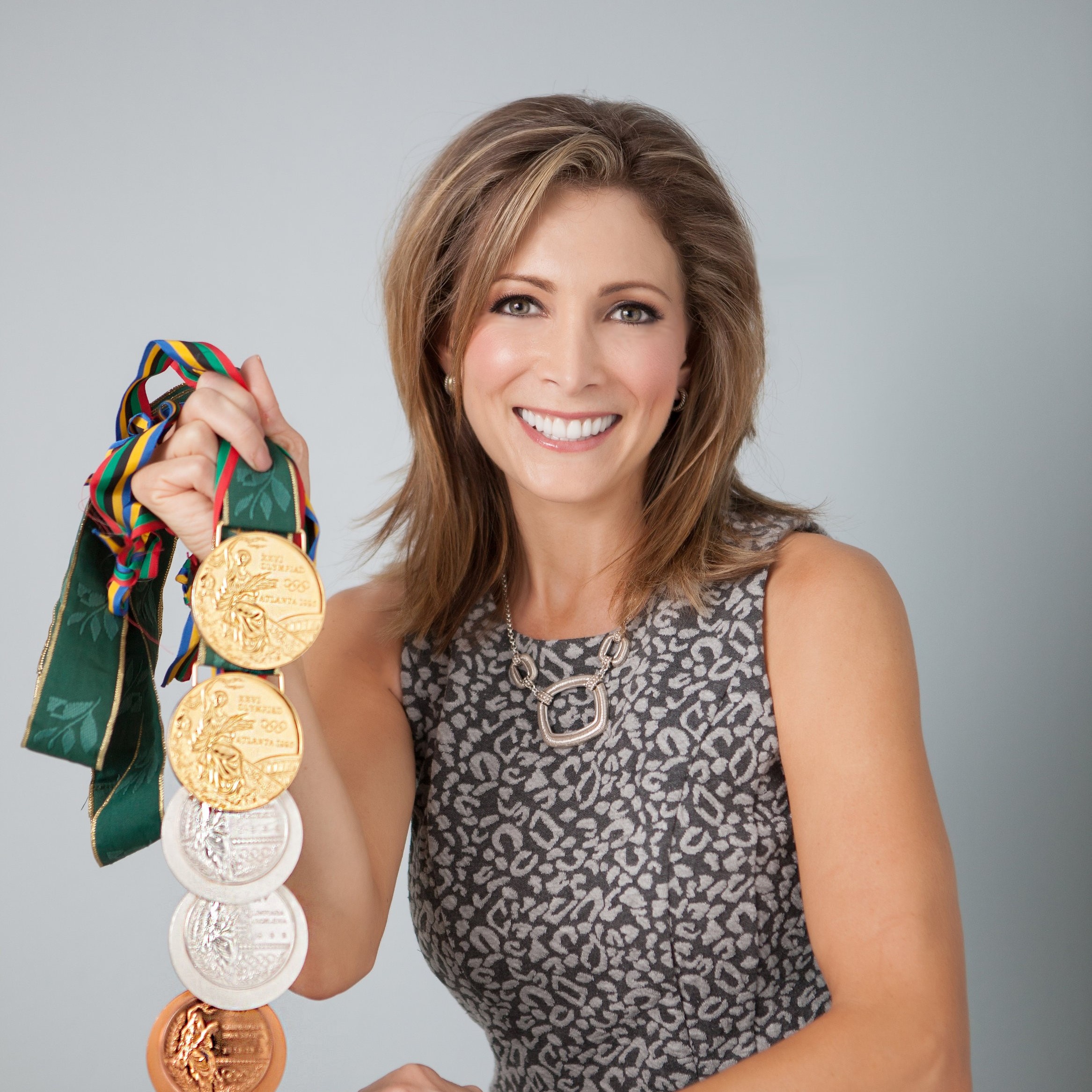 7 Time Olympic Medalist, Cancer Survivor
Shannon Miller remains the Most Decorated Gymnast in American History. She is the only American to rank among the Top 10 All-Time gymnasts and is the only female athlete to be inducted into the US Olympic Hall of Fame – Twice! [Individual (2006) and Team (2008)]

Shannon has won an astounding 59 International and 49 National competition medals. Over half of these have been gold. In 1993/94 Shannon became the first US gymnast to ever win back to back World All-Around Titles and she is the first American female to medal in the individual all-around of a non-boycotted Olympics. Her tally of five medals (2 silver, 3 bronze) at the 1992 Olympics was the most medals won by a US athlete in any sport. At the ’96 Games, she led the “Magnificent Seven” to the US Women’s first ever Team Gold and for the first time for any American gymnast, she captured Gold on the Balance Beam. She is the first American gymnast to win an individual gold medal at a fully-attended Summer Games and cemented her place as the most accomplished gymnast, male or female, in U.S. Olympic history.

After retiring from Olympic competition, Shannon received her undergraduate degrees in marketing and entrepreneurship from the University of Houston and her law degree from Boston College. She then moved from Olympic athlete to advocate for the health and wellness of women and children.

Shannon launched her company Shannon Miller Lifestyle: Health and Fitness for Women along with her series of fitness books, cookbooks and fitness DVD’s in July, 2010. She continues to travel the country as a highly sought after motivational speaker and advocate for the health and wellness of women and children. Shannon’s seeks to empower women to make their health a priority through education and awareness.

In January of 2011, Shannon was diagnosed with a rare form of ovarian cancer. She had the baseball sized tumor removed successfully and followed up with three rounds of aggressive chemotherapy. Shannon has remained open and public about her diagnosis and treatment and continues to empower women to make their health a priority. Shannon is currently cancer free and continues to be a strong advocate for early detection.

Shannon recently released her new book It’s Not About Perfect: Competing for My Country and Fighting for My Life. In her inspirational memoir Shannon encourages and empowers others to break through and overcome their own personal challenges.

Shannon remains involved with the sport of gymnastics and the Olympics as a commentator and analyst. In addition, She has partnered with Mancino Mats to create the Shannon Miller Collection (Training Tomorrow’s Legends) of gymnastics mats and padding. She has also partnered with Alpha Factor to create her personal line of fitness and gymnastics apparel that helps athletes look great and feel confident.

The Gold Medal Mindset
Shannon discusses how the gold medal mindset leads to victory on the competition floor, in the boardroom, and in our personal lives. With seven Olympic medals, Shannon utilizes her critical insight to share what it takes to be a winner: the importance of goal setting, leadership, maintaining a positive attitude, and teamwork. Through her Olympic and personal experiences, Shannon explains ways we can overcome even the most difficult obstacles standing in the way of our success. While she may not have been the most talented, flexible, or even the strongest athlete, Shannon Miller was able to utilize these concepts to become The Most Decorated Gymnast in United States history! Your audience will leave empowered to seal the deal with that next client, work together for a positive outcome, and understand the steps it takes to be a successful leader in both work and life.

Gold Medal Advice to a Fit and Healthy Lifestyle
While much of the world is telling you, Don't eat this. Don't do that,gold medal Olympian and health advocate, Shannon Miller, shares her message of everything in moderation. Most of us do not have 4 hours a day to work out, but that doesn't mean we should give up. Eating healthy doesn't mean giving up everything that you love. Shannon shares the importance of making small changes that have a big impact on your overall health. Through her own experience with weight gain and low self-esteem following her retirement from competition, this Olympian and mother of two, found her way back to a healthy moderation. Your audience will leave with specific goals and motivated to take the next step in their own healthy lifestyle.

Competing with Cancer
We will all be touched by cancer at some point- whether it is you, a loved one, a friend, or co-worker. The cancer journey is a unique one for each of us, but it is one that we can follow with dignity and strength. Shannon shares her own cancer journey and how she used lessons learned through her Olympic training to forge ahead in the midst of the most challenging obstacles. She speaks about the importance of caregivers and the incredible role they play. Through her story, your audience will learn the how importance it is to set goals and maintain a positive attitude, the importance of early detection and why making your health a priority is a lesson for all of us. Shannon Miller empowers each of us to take control of our own health and arms us with specific ways we can do just that.

*Please let us know if you have specific needs and we will work with you to tailor a speech to your audience.

Speech Topics: Cancer Awareness   Celebrity   Fitness   Health and Wellness   Leadership   Motivation and Inspiration   Olympians   Virtual Presenter
Our goal is to provide speakers that encourage, entertain, and educate, YOUR audience! Work with Preferred Speakers to book the perfect speakers and entertainers for YOUR event!
Get In Touch
© Copyright - Preferred Speakers - 2022
Back To Top