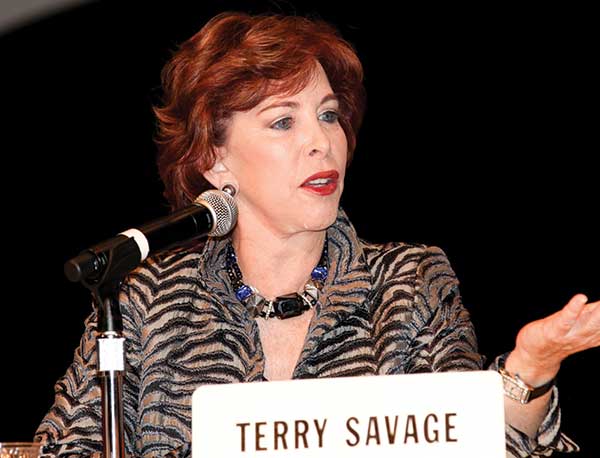 The Savage Truth on Money, Markets and the Economy
Terry Savage is a nationally known expert on personal finance, the markets, and the economy. Terry is a regular blogger at the Huffington Post. She is a frequent guest on television and radio shows, including CNN, CBS, and appeared many times on Oprah!

Terry Savage is a nationally recognized expert on personal finance, the economy and the markets. She writes a weekly personal finance column syndicated in major newspapers by Tribune Content Agency.

She is the author of four best-selling books on personal finance. The Savage Truth on Money was named one of the top ten money books of the year by Amazon.com in its first edition. Her other recent book is: The Savage Number: How Much Money do You Really Need to Retire?

Terry appears frequently on national television and radio programs, commenting on the financial markets and current economic events. She is featured on WGN Radio and WGN-TV in Chicago, with a weekly personal finance segment. And in days past you saw her often as a money expert on Oprah!

Terry is in demand as a speaker on the economic outlook, the markets, and personal finance topics. For a keynote address she provides a reality check on the volatile economy and financial markets, including the impact of politics and current events.

For corporate programs, Terry gives a down-to-earth explanation of the importance of saving and investing in company benefit plans, as well as planning for college, dealing with student loans, and other personal finance topics..

Terry has worked nationally with major corporations, including Wal-Mart, McDonalds, Walgreens, Hilton, and Allstate to share her message of financial literacy and empowerment with their employees. She is a registered investment advisor, although she has no individual clients, nor does she represent any financial products or services. She is a truly independent voice for the financial consumer.

Terry is also an experienced moderator at meetings and conferences, where she is comfortable conversing with CEOs and managing large panels of experts to bring out the best in all, and create an organized, informative, and entertaining program for the audience.

She has won numerous awards, including the National Press Club award for Outstanding Consumer Journalism, and the Outstanding Personal Finance Columnist award given by the Medill School of Journalism at Northwestern University.

Terry’s expertise comes from experience. She started her career as a stockbroker, and became a founding member and first woman trader on the Chicago Board Options Exchange. She was also a member of the Chicago Mercantile Exchange’s International Monetary Market, where she traded interest rate futures and currencies. She now serves on the Board of Directors of CME Group, parent company of the Chicago Mercantile Exchange. She has also served on the boards of McDonalds Corporation and Pennzoil Corporation.

From business executives to newly-hired young employees, Terry’s engaging style will inform, educate and entertain your audience on a subject everyone cares about: Money!

Economic Outlook
Terry will create a speech on the economic outlook, the political implications, and the financial markets”all crafted to reach your specific audience. She includes industry specific references, and up-to-the minute topics to both entertain and inform”as well as giving some ideas on what to do with your own money!

Financial Investments
Corporations use Terry's respected advice and independent point of view to educate their employees about benefits programs, company retirement plans, and overall financial planning. Ask Walmart, Allstate, Walgreens, CNA Insurance, McDonalds, and others who have brought Terry back year-after-year to refresh and update their employee's knowledge of personal investment and retirement planning”from the basics of wise use of credit to the importance of investing for growth in the company plan.

Emcee/Moderator
Major corporate clients including Hilton, Motorola, CUNA Mutual, John Hancock, Fidelity, and many others use Terry's services as a skilled moderator”keeping the attention of the audience and effortlessly maintaining your schedule through several days of programming. Whether moderating a panel or interviewing the CEO, Terry does her homework and works with your meeting planners to achieve your desired results. Her quick wit and intelligence, plus her years of experience hosting her own TV interview show, ensure that your meeting will be lively, entertaining”and to the point.

Speech Topics: Economics   Economy & Finance   Finance   Masters of Ceremonies, Emcees and Moderators   Women Today
Our goal is to provide speakers that encourage, entertain, and educate, YOUR audience! Work with Preferred Speakers to book the perfect speakers and entertainers for YOUR event!
Get In Touch
© Copyright - Preferred Speakers - 2021
Back To Top