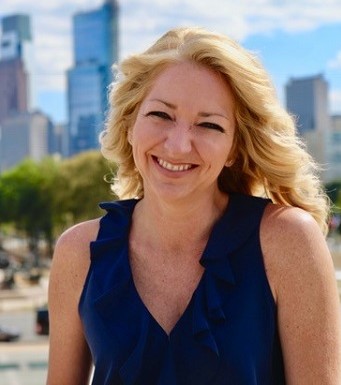 Ashley Fox is one of the NFL’s most well respected journalists and a trailblazer in the ego-infused world of sports media. During her 24-year career, including 7 years as a lead NFL reporter and analyst for ESPN, Inc., The Worldwide Leader in Sports, Ashley covered the United States’ most popular sport for the largest sports media network in the world.

Ashley Fox is one of the NFL's most well-respected journalists and a trailblazer in the ego-infused world of sports media. During her 24-year career, including 7 years as a lead NFL reporter and analyst for ESPN, Inc., The Worldwide Leader in Sports, Ashley covered the United States' most popular sport for the largest sports media network in the world.

By being fair, honest and accountable, with unwavering professionalism and boundless optimism, Ashley earned the trust of professional athletes, coaches, owners, team executives and league commissioners.

Ashley understands the power of relationships - as well as the steps to build and maintain them. She has mastered the lost art of listening and knows that the best questions mine the most insightful answers. To this day she maintains lasting relationships with some of the most powerful people in professional sports, proving that championship teamwork isn't just for NFL Sundays.

Since 1993, Ashley Fox has reported from the world's largest sporting events, including the Summer Olympics, Wimbledon, the Super Bowl, the NBA Finals, the Final Four, the World Series, the Stanley Cup Finals, and the PGA Championship. Ashley's written work has been featured on ESPN.com, TheUndefeated.com, ESPNW.com and in ESPN The Magazine, Sports Illustrated and the Philadelphia Inquirer.

Ashley has appeared on ESPN's signature studio shows SportsCenter, Outside the Lines, The Sports Reporters, Pardon The Interruption, NFL Live, NFL Insiders, His & Hers and Jim Rome is Burning, as well as on CNN and MSNBC. Her seven-minute story Brothers in Arms kicked off the 2017 season of ESPN's SC Featured and detailed the relationship between Pittsburgh Steelers offensive lineman Alejandro Villanueva, a former Army Ranger, and his Afghan translator Mohammad Arif Azimi with whom Villanueva served in Afghanistan.

A graduate of Indiana University, Fox is a world-class communicator who shares with audiences around the world her inspiring story of determination, perseverance, balancing personal and professional integrity, believing in the impossible and overcoming obstacles. Attendees of Ashley's presentations learn the proven leadership, communication and teamwork strategies that took her from a small-town girl with big-time dreams to an award-winning reporter and columnist for the preeminent sports network on the planet.

Ashley is a North Carolina native, a recovering tennis protégé and an aspiring black belt in the karate discipline Tang Soo Do. She resides in suburban Philadelphia with her two amazing kids and one insane Labrador.

Go Far Together:  Lessons From the Sideline
NFL coaches by nature are overachievers, plagued by insecurity and motivated by the pursuit of greatness and the avoidance of failure. They are the de facto CEO's of billion-dollar corporations. In this inspiring keynote, Ashley shares her unique experiences covering America's sporting obsession and the lessons she's learned from the leaders of the most exceptional athletes on the planet.

In her keynote you will learn how to:
• Excel by being disciplined, prepared and regimented;
• Motivate yourself and others by setting expectations and not wavering from them;
• Lead by accepting blame for failure and deflecting credit for success.

"Ashley Fox' ease and poise as a host for our Bears Club Annual dinner was the "ticket" to success. Ashley's thorough preparation was obvious as her questions were on-point and primed our guest coaches for thoughtful response. Thanks for Ashley's professionalism this dinner program has been described the best in Lenoir-Rhyne University history by an overwhelming majority of the 380 guests in attendance."
T.L.., MANAGING DIRECTOR, LENOIR-RHYNE UNIVERSITY BEARS CLUB

"Ashley Fox is one of the more compelling, thoughtful, and effective speakers I have come across during more than 25 years as the Head of School at Shipley. Blessed with a great mind, a big heart, and many wonderful stories, she has the ability to hold an audience and to deliver important messages for people to think about. We saw this first-hand when she joined Dr. Jim Loehr, well renowned psychologist and best-selling author; Molly Fletcher, author, speaker, former sports agent; Pat Croce, former owner of the 76ers; and Paul Assaiante, world renowned squash coach, pro, and author on stage here at Shipley. She captured the audience in an extraordinarily special way. Her ability to deliver important messages with humor, understanding, and compassion was noticed by everyone who was in the room. Incredibly down to earth and committed, she is able to meet her audience where they are and to move them accordingly. In addition to liking Ashley a great deal, I have great admiration and respect for her and I look forward to hearing her speak again soon."
S.P., HEAD OF SCHOOL, THE SHIPLEY SCHOOL

"Having known Ashley professionally and personally for over a decade, I have consistently found her to be extremely professional, full of integrity and dedicated to her craft. I've seen firsthand her ability to engage audiences during her speeches. Her message on building and nurturing relationships, overcoming obstacles and succeeding as a female in a male-dominated profession has consistently received rave reviews from her audiences. I look forward to hearing her present again, and highly recommend her as a speaker."
A.B., FORMER VP PACKERS, FORMER ESPN BUSINESS AND LEGAL ANALYST, SPORTS ILLUSTRATED