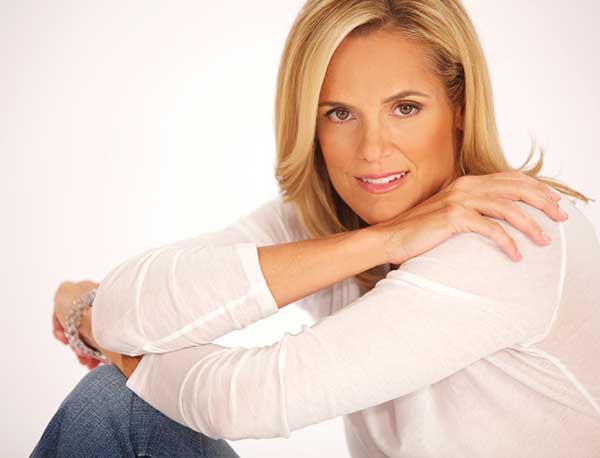 Olympic Swimming Champion
Dara Torres is arguably the fastest female swimmer in America. She entered her first international swimming competition at age 14 and competed in her first Olympic Games a few years later in 1984.

Dara Torres, the most decorated US female Olympic athlete of all-time, NY Times best-selling author, fitness advocate, motivational speaker, entrepreneur, and mother, started her career on the international stage by breaking her first world record at the age of 15. This incredible feat was accomplished on the way to her first of 5 Olympic appearances, in Los Angeles at the 1984 Games.

Torres who owns 4 Gold, 4 Silver and 4 Bronze medals was never someone that competed for the accolades instead for the challenge of doing what no one else has ever done. That intense passion for the unknown has driven Dara to represent the US from age 15 to age 41. This incredible journey, 26 years on the Olympic stage, has never been accomplished by any other American athlete and serves as the backdrop for Dara’s incredibly motivating speeches delivered to corporations all over the world. As one of the most requested female keynote speakers, Dara captivates audiences with her story of overcoming obstacles such as her age both young and old, injuries, insecurities, eating disorders, being bullied and others on her way to one of the most storied Olympic careers ever. Torres was inducted into the United States Olympic Committee’s Hall of Fame in 2019 along with other iconic Olympic athletes such as Nastia Liukin, Apolo Ohno, and Misty May-Treanor.

During Dara Torres’s career, she was a Wilhelmina model, named the first athlete model featured in the Sports Illustrated Swimsuit issue, hosted the most successful fitness infomercial of all-time the Tae-bo program with Billy Blanks selling over 10 million DVDs, and also worked on Cindy Crawford’s Crepe Erase which generated hundreds of millions of dollars in sales.

Dara has been a spokesperson for hundreds of companies including Toyota, Quaker Oats, Speedo, CaniBrands, Amlactin, and others. Dara is visible regularly on CBS Sports’ We Need To Talk, the first-ever all-female sports talk show that airs nationally, focusing on women’s perspective of sports.

Additionally, Dara is an entrepreneur and has invested in several companies including CaniBrands, a leading CBD company in addition to owning equity in two (2) Barre Method studios.  Dara has found being an entrepreneur as challenging and competitive as being an Olympic level athlete says Dara, “I always remember my father being in business for himself, so I am sure that is where I got the hunger for wanting to be involved with ownership. I love the competition and the passion to succeed so my skills are always getting better, but my desire to make my companies great is always there!”

Never Give Up Your Dream
Dara Torres shares her incredible story about defying the odds. As one of the most successful Olympians of all time, Torres experienced tremendous success at the 2008 Beijing Olympics where she was the oldest member of the U.S. Olympic Swim Team. In a presentation filled with humor and inspiration, Torres tells the audience that age and experience are advantages. “Use them to achieve your goals,” she says. She encourages audiences not to give up on their dreams and to fully embrace the sacrifice and dedication required to achieve what may initially seem impossible.

Age is Just a Number
Dara talks frankly about diving back in for this comeback; about being an older athlete in a younger athletes’ game; about competition, doubt, and belief; about working through pain and uncertainty; and finally—about seizing the moment and, most important, never giving up. A truly self-made legend, her story will resonate with women of all ages—and with anyone daring to entertain a seemingly impossible dream.

Breaking Through Barriers In and Out of the Water
Dara chronicles her incredible swimming career along with her fight as a woman working through mother hood, work and making an ESPY winning comeback to swimming.

"Dara was fantastic! Standing "O" for opening and closing. Couldn't have been easier to work with."

"Dara was terrific. Employees loved the events...I would recommend Dara to anyone who needs an inspirational speaker."