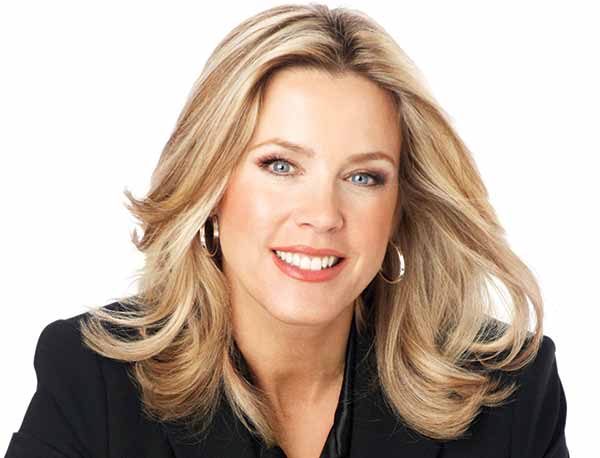 Two-time Emmy© Award winner Deborah Norville is Anchor of Inside Edition, the country’s top-rated and most honored syndicated newsmagazine. Ratings jumped 15% the week Norville joined the program and have remained high ever since.

Throughout her tenure, the show has consistently ranked in the top ten television shows in first-run syndication. Inside Edition, reaches a daily audience of just under 5 million viewers.

In 2016, Norville, the longest serving anchor on American television, was inducted into the Broadcasting & Cable Hall of Fame. The veteran journalist joined Inside Edition, in 1995 from CBS News where she was anchor and correspondent. Norville is the former co-host of NBC’s Today and anchor of NBC News at Sunrise. During the course of her career she has hosted the primetime Deborah Norville Tonight on MSNBC and the national Deborah Norville Show on the ABC Talk Radio Network. She began her career at WAGA –TV in Atlanta, while still a student at the University of Georgia, where she was elected to Phi Beta Kappa and graduated summa cum laude, 4.0 First Honor Graduate. She has also been a reporter and anchor for WMAQ-TV.

Norville is also a best-selling author and lecturer. Her book, Thank You Power: Making the SCIENCE of Gratitude Work for YOU (2007, Thomas Nelson) detailing the connection between gratitude and enhanced cognitive function and energy, was a New York Times best-seller as well as a best-seller in South Korea. She is also co-author and contributor to the popular Chicken Soup for the Soulseries, and the author of several other self-help books as well as two best-selling children’s books and a number of books featuring knit and crochet patterns.

A lifelong crafter and seamstress, Norville has partnered with Premier® Yarns as the creative force behind the Deborah Norville Yarn Collection™, a line of high-quality yarn for knit and crochet enthusiasts found online and in top chains, including Jo-Ann Stores. The product has enjoyed exponential growth since its launch in 2009, selling well over six million skeins since its debut. The collection includes knitting needles and crochet hooks and the only anti-pillling acrylic yarn available: Deborah Norville Everyday® yarn.
​
Norville is a member of the Board of Directors for the Viacom Corporation and serves on the Compensation Committee. She is also a member of the Council on Foreign Relations, Women’s Forum of New York, and Women Corporate Directors. Norville serves as a Director for the Broadcasters Foundation of America. She is a past board member of the Girl Scout Council of Greater New York, Rita Hayworth (Alzheimer’s) Steering Committee. She is also on the boards of two privately held family firms.

She is married and the mother of three.

Thank You Power
Making Gratitude Work for You

The Media in the Cross Hairs : Journalism in a time of “Fake News”

Leadership: Who’s Leading Whom?
The challenges of leading in an ever changing landscape.

Entrepreneur of Your Life
Everyone it seems aspires to ‘be their own boss.’ What’s the secret. How can any of us orchestrate our lives so WE are in charge. As the longest serviing anchor in America, as well as a Director for a publicly traded company (Viacom), best-selling author, and face behind the Deborah Norville Yarn Collection, I share the secrets for ‘keeping going’ when it seems the answer is always ‘no.’

Motivate Me
Inspirational address leaves attendees fired up and ready to tackle their challenges.

Glass Ceilings or Sticky Floors?
What are the challenges women face today in business and their personal life? Insights from top researchers and personal anecdotes are the basis of this discussion filled with ‘take-home’ information for audience members.

Speech Topics: Celebrity   Gratitude   Journalism   Personal Growth   Women Today
Our goal is to provide speakers that encourage, entertain, and educate, YOUR audience! Work with Preferred Speakers to book the perfect speakers and entertainers for YOUR event!
Get In Touch
© Copyright - Preferred Speakers - 2023 | Terms and Conditions
Back To Top