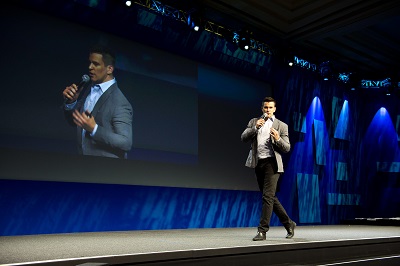 Jeff Civillico recently celebrated a 10-year run on the Las Vegas Strip as a Headliner with Caesars Entertainment at the iconic hotel properties The LINQ, The Flamingo, and The Paris. His clean, family-friendly “Comedy in Action” show remains highly acclaimed: voted “Best of Las Vegas” three years in a row by the Las Vegas Review Journal, named “Entertainer of the Year” by Vegas Inc, and honored by his fans with a 5-star rating on Yelp, Ticketmaster, and Google.

Jeff now takes his renowned clean comedy show to live, virtual, and hybrid corporate events and conferences nationwide. He also serves as a Host and Keynote Speaker. When Jeff is not on stage or on camera, he is working on the continued expansion of his national nonprofit Win-Win Entertainment. Win-Win Entertainment brings smiles to children who need them in hospitals by arranging in-person and virtual visits from performers, athletes, and celebrities.

1. Jeff has Produced and Headlined his own one-man clean comedy show in Las Vegas for the last 10 years as a Headliner with Caesars Entertainment at the iconic properties The LINQ, The Flamingo and The Paris.
2. Jeff’s “Comedy in Action” show is highly-acclaimed, having been named: 3x winner of “Best of Las Vegas” by the Las Vegas Review Journal, one of the “Top 10 Things To Do In Vegas” by Total Vegas Guide, and “Entertainer of the Year” by Vegas Inc.
3. Jeff and his 10-year Las Vegas Residency will be featured in a full-length documentary in the coming months to a streaming service.
4. Jeff is in high demand in the meetings industry not only as an Corporate Entertainer, but also an Emcee and Keynote Speaker. Jeff has presented for countless companies including Disney, OSHA, AT&T, Verizon, Caterpillar, Grainger, AAA, Honeywell, Culver’s, Auntie Anne’s, Rite Aid, Cisco, and A&W.
5. Jeff now serves as a virtual emcee and entertainer for virtual events, partnering with Show Creators Studios in Las Vegas. He’s done 200+ virtual events since March 2020!
6. Jeff has extensive TV experience as an emcee and host personality. He has hosted national programs on ABC, NBC, ESPN, Travel Channel, Cooking Channel, etc. He is a regular guest host of “The Morning Blend” on KTNV-Las Vegas.
7. Jeff is Founder and Chairman of Win-Win Entertainment, a 501c3 national non-profit that brings smiles to children in who really need them by arranging in-person and virtual hospital visits from professional entertainers, athletes and celebrities. Win-Win Entertainment is 100% volunteer based.
8. Jeff is an avid professional member of the National Speakers Association, having served as the Marketing Chair and Membership Chair for the local Vegas chapter. He is honored to be the “wow emcee” for the 2021 NSA National Conference in Las Vegas in July.
9. Jeff remains very committed to his alma mater Georgetown University. He is President of the local Georgetown University Alumni Club of Las Vegas, and sits on the Board of Governors for the University Alumni Association at large.
10. Jeff is a little crazy! He holds a world record for bungee jumping on his unicycle off a cliff in New Zealand, and goes “joggling” for fun. “Joggling” = juggling while jogging. He raised $5000+ as a team member of “Athletes for Special Kids” by joggling all 26.2 miles of the Disney Marathon.
Speech Titles and Descriptions:

Work That Matters
So often we think of a career in a given industry as the ending point. We want to get a certain job for a certain reason – title, status, money, respect, etc. If we go through X amount of schooling, jump through X amount of hoops, get X amount of clients, then we will arrive at the profession / position we want and therefore be happy. What if we flipped that mindset? What if acquiring that position or desired career wasn’t the end, but just the beginning?

In “Work That Matters,” Jeff uses his own personal story of leveraging his Vegas show platform to create more meaning in his work and life than he could ever have imagined starting off on his career journey. The programs that evolved from Jeff’s Vegas show platform were not revenue-driven, but indirectly have added a great deal of business and value to his brand in a virtuous circle. Through a series of strategic “pivots,” Jeff was able to flip hardships into assets, and secure a contract as a relatively unknown entertainer at the time with Caesars Entertainment for his own headline show at The Flamingo Hotel & Casino. Jeff’s story of fighting through the cutthroat politics of the entertainment industry in Las Vegas is eye opening, humorous, and powerful.

Jeff challenges his audiences to view a successful profession in whatever their field might be as the beginning and not the end. What could your attendees accomplish if they re-imagined their professional career as an opportunity to do as Jeff calls it, “work that matters?”

Takeaways:
•Jeff is the perfect blend of entertainer and speaker. His signature talk “Work That Matters” is a perfect way to start or end a meeting, conference, or any opportunity where you want your attendees both thoroughly entertained and inspired.

•You can’t always bring your attendees to Vegas, but you can always bring Vegas (Jeff!) to your attendees. Don’t forget that by hiring Jeff you are not only getting an inspiration speaker, but also a true Vegas headliner that will bring a level of credibility to your event entertainment.

•Jeff will enable a renewed sense of passion and purpose in attendees’ work and lives. Attendees will walk away more engaged with what they do, and why they do it. Jeff is the perfect presenter for companies who look beyond numbers to the importance of caring for the “the whole person.”

Power of the Pivot
Jeff’s journey from juggling in his kitchen as a child to headlining in Vegas with own TV show is naturally inspiring, and his passion is naturally contagious. His story of fighting through the cutthroat politics of the entertainment industry is eye-opening, humorous, and powerful. Jeff shared how through a series of strategic “pivots” along his career path, he has continuously leveraged what he has had to flip hardships into assets. Attendees walk away with actionable insights on how and when to apply pivots of attitude, energy, and mindset to their work and personal lives.

Speech Topics: Comedy and Entertainment   Entertainment   Masters of Ceremonies, Emcees and Moderators   Motivation and Inspiration   Teamwork   Virtual Presenter
Our goal is to provide speakers that encourage, entertain, and educate, YOUR audience! Work with Preferred Speakers to book the perfect speakers and entertainers for YOUR event!
Get In Touch
© Copyright - Preferred Speakers - 2021
Back To Top